Historical Background
Epaminondas decided to capitalize on his crushing victory at Leuctra by invading the Peloponnese and shattering Sparta's power once and for all. In Arcadia, he founded the new city of Megalopolis and the Arcadian League. Moving south, he reached Sparta and ravaged Laconia, without opposition. Finally he went west to Messenia, enslaved by the Spartans for more than 200 years, and rebuilt the ancient city of Messene. He then issued a call to Messenian exiles to return and rebuild their homeland. Sparta was humbled, had lost half of the helots, and faced two new enemy states in the Peloponnese. Up north, Pelopidas freed the cities in Thessaly from Macedonian influence. Epaminondas was drastically changing the Greek world. Thebes had become too powerful for the other Greek city-states, and even Athens joined the Spartan alliance. Epaminondas launched another expedition into the Peloponnese in 362 BC, to subdue the former ally Mantinea. Marching north from Tegea he encountered the enemy, with Mantineans on the right, Spartans in the center, and Athenians on the left. As at Leuctra, Epaminondas deployed the Thebans on the left in a 50-deep phalanx, with Tegeans, Messenians and other allies in the center and right. Then he ordered his men to pile their arms and apparently begin to encamp. When his foes were entirely o® their guard, Epaminondas suddenly drew up his lines and advanced upon them "like a trireme, with the spur of the prow out in front". The Thebans routed the Mantineans and Spartans, and the entire enemy phalanx was put to flight. Everything suggested a second Leuctra until Epaminondas was mortally wounded. He asked for commanders who could take his place, but all had been slain. "Then you must make peace with the enemy", he said, and closed his eyes to death. Theban supremacy over Greece died with him. Five centuries later, one could still gaze at his statue and read his proud epitaph:
By my plans was Sparta shorn of her glory,
And holy Messenia at last received back her children.
By the arms of Thebes was Megalopolis fortified,
And all of Greece became independent and free.
The stage is set. The battle lines are drawn and you are in command. The rest is history. 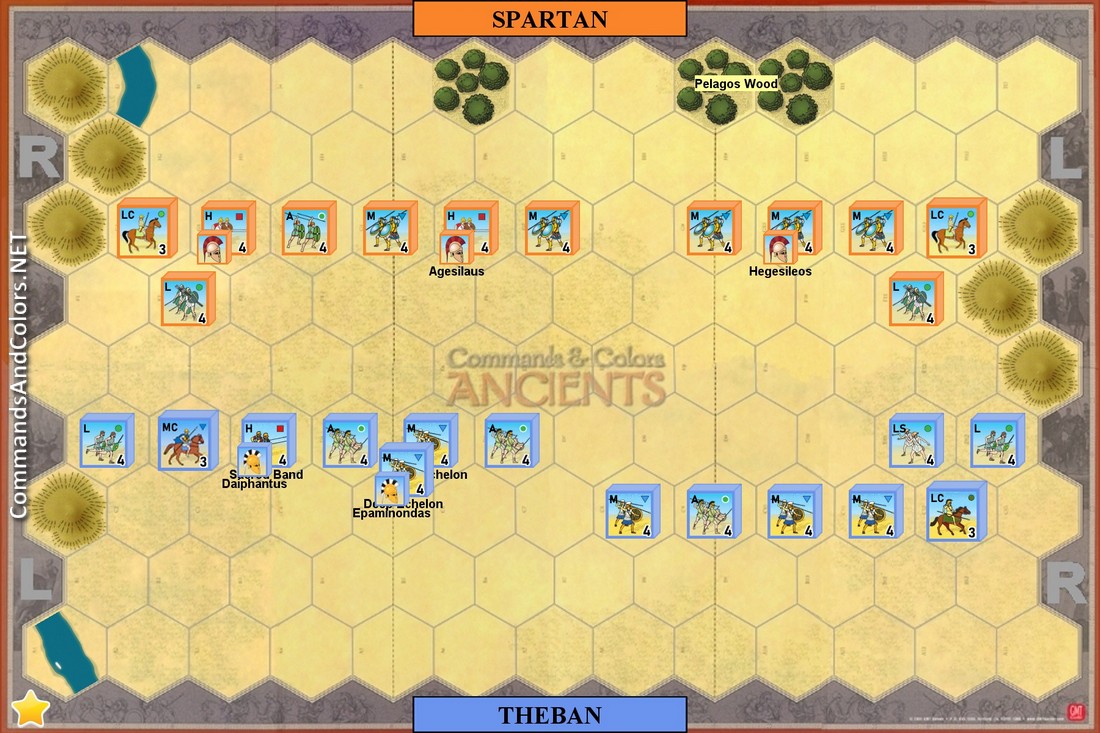 Special Rules
The stream is fordable.

Sacred Band: it is a special unit. It will ignore 1 sword symbol and may ignore 1 flag.

Deep Echelon Unit: it represents the deep Theban phalanx formation and has 8 blocks. It will ignore 1 sword symbol and may ignore all °ags. It counts as 2 Banners if eliminated.

Warboard replied the topic: #3859 1 year 5 months ago
From Instagram @warboard: In the last battle of Kreso's visit to Manchester, the 2nd Mantinea 362 BC, he gets his payback as his Thebans and allies manage to win 6 to 4 trophies, just as my Spartans rallied and got ready for one last all-sweeping charge.
Read More...