Historical Background
At the beginning of the 4th Century BC the Spartans continued to assert their leadership of the Greek world, established by their victory in the Peloponnesian War. But Thebes began to overcome the widespread fear to face the Spartans in combat through the di®erent battles that opposed them during the Corinthian War, and found in Epaminondas the general they needed to lead them. Sparta could not tolerate a challenging growing power up north, nor the democratic ideas that the Thebans were spreading all over Greece that threatened their social structure based on the enslavement of other Greeks. Cleombrotus marched to war with a Peloponnesian army about 10,000 strong, and was confronted at Leuctra by a Boeotian levy of about 6,000 soldiers. Epaminondas realised that he had to face the Spartans, even outnumbered, and managed to convince his men that an open battle was their only hope. Since phalanx formations tended to edge right as the hoplites moved toward their unshielded side, Greek commanders traditionally placed their best men on the right wing in order to avoid the drift. Epaminondas, however, knowing that at both Nemea and Coronea the Thebans had been victorious on the right but had lost the battle on the left, decided to lead the attack on the left, spearheaded by the Sacred Band, in order to strike a single and decisive blow on the Spartan elite. Not having enough men to cover the whole battle line, he refused center and right and massed his Thebans in a 50-deep phalanx on the left, exploiting the principle of local superiority that his countryman Pagondas had introduced at Delium. The Theban cavalry drove o® the Spartan cavalry and peltasts and screened the view of the unusual Theban battle formation, that smashed into the Spartan hoplites before they could even realise what was going on. The Spartan 12-deep phalanx could not sustain the heavy impact of the Thebans, and were literally run over by the enormous 50-deep column. Almost all the Spartan hoplites died, including their King. Seeing their right wing beaten, the rest of the Peloponnesians, mostly unwilling participants, fled before engaging the enemy. The "most decisive battle ever fought by Greeks against Greeks" led Thebes to the zenith of her power. The fall of Sparta had begun.
The stage is set. The battle lines are drawn and you are in command. The rest is history. 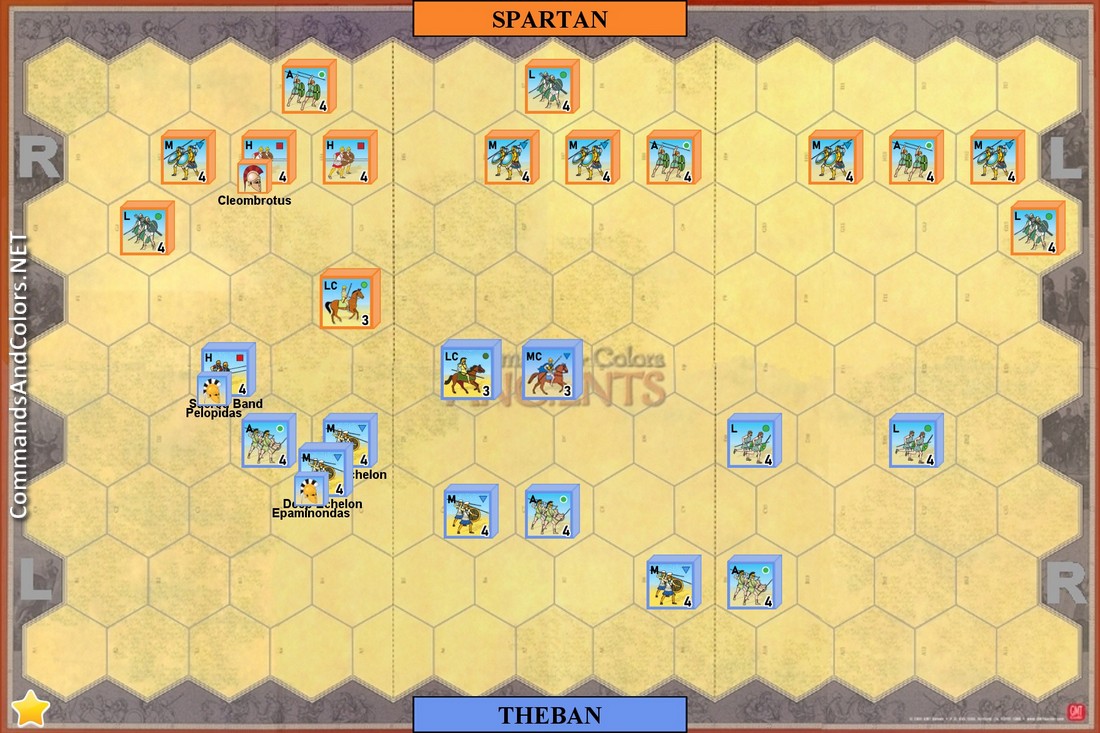 Special Rules
Sacred Band: it is a special unit. It will ignore 1 sword symbol and may ignore 1 flag.

Deep Echelon Unit: it represents the deep Theban phalanx formation and has 8 blocks. It will ignore 1 sword symbol and may ignore all flags. It counts as 2 Banners if eliminated.