Historical Background
In 379 BC an insurrection ejected the Spartan garrison at Thebes, and the city set about reestablishing its control over the Boeotian League. After several years of campaigning, the Thebans succeeded in driving Spartan garrisons out of every city in Boeotia but Orchomenus. In 375 BC Pelopidas set out with the Sacred Band and a small force of cavalry intending to seize Orchomenus while the Spartan garrison had gone to Locris. However, learning that a sizable force had been dispatched from Sparta to reinforce the Orchomenus' garrison, they retreated. But before the Thebans could reach safety at Tegyra, they met the original Spartan garrison returning from Locris. The Thebans, some 300 hoplites, were heavily outnumbered by the two Spartan companies, between 1,000 and 1,800 hoplites. Plutarch reports that one Theban soldier, upon seeing the enemy force, said to Pelopidas: "We are fallen into our enemies' hands", to which he replied: "And why not they into ours?". Pelopidas then ordered the Theban cavalry to charge while the infantry formed up into an abnormally dense formation. When the two phalanxes came together, the compact Theban formation broke through the Spartan line at the point of contact, then turned to attack the vulnerable flanks of the Spartans to either side. The Spartan force broke and fled, although the Theban pursuit was limited by the proximity of Orchomenus. The Theban victory at Tegyra had little immediate military significance, beyond the survival of the Sacred Band. However, the victory was a symbolically significant event. It marked the first time the Thebans had erected a trophy of victory over a Spartan force, for previous victories had generally been in much smaller skirmishes, and the first occasion on which a Spartan formation had been defeated by a force of equal or lesser size in set battle. For these reasons, Plutarch saw in Pelopidas' victory a "prelude to Leuctra". The Sacred Band was formed in 378 BC by Gorgidas, but before Tegyra it had been dispersed throughout the front ranks of the Theban army. Pelopidas formed them into a distinct unit that was going to dominate Greek warfare for forty years, undefeated in battle until their annihilation at the hands of Alexander (not yet The Great) in Chaeronea.
The stage is set. The battle lines are drawn and you are in command. The rest is history. 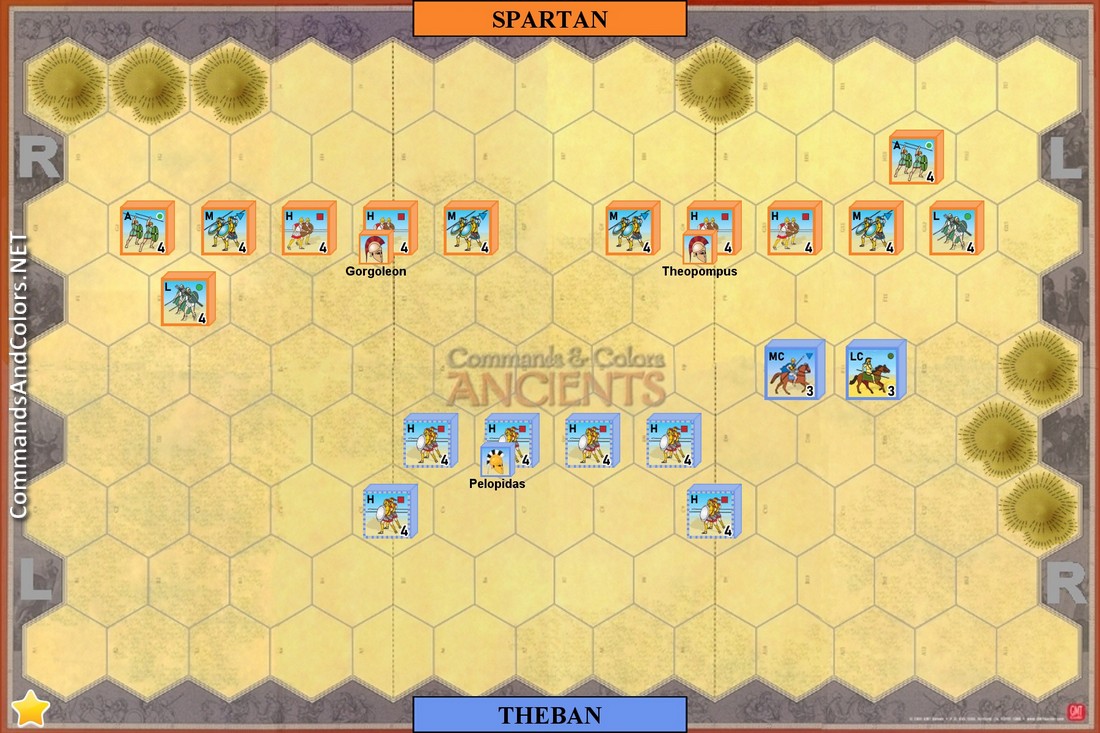 Special Rules
All the Theban foot units belong to the Sacred Band. They are a special unit, that will ignore 1 sword symbol and may ignore 1 flag, only if they are adjacent to another Sacred Band unit.