Historical Background
At the beginning of the 4th Century B.C., the cities of Thebes and Sparta were engaged in a political feud and sporadic warfare as the Spartans sought to enforce their position as the predominant Greek city-state while the Thebans resisted and struggled to expand their influence. One of the principle issues between the two powers involved the region of Boeotia, which was under the political influence of Thebes. The dispute came to a head when a coalition of Boeotian city-states appealed to Sparta to free them from Theban political control. The Spartans demanded that the Thebans disband their army of occupation. The Thebans refused, and so the Spartan King Cleombrotus I marched to war from Phocis. Rather than take the expected, easy route into Boeotia through the usual defile, the Spartans marched over the hills via Thisbae and took the fortress of Creusis (along with twelve Theban warships) before the Thebans were aware of their presence. It was here that a Peloponnesian army, about 10,000–11,000 strong, which had invaded Boeotia from Phocis, was confronted by a Boeotian levy of perhaps 6,000–7,000 soldiers under Epaminondas. In spite of inferior numbers and the doubtful loyalty of his Boeotian allies, Epaminondas offered battle on the plain before the town. The battle opened with the Spartan's mercenary peltasts (slingers, javilineers and/or skirmishers) attacking and driving back the Boeotian camp followers and others who were reluctant to fight. There followed a cavalry engagement, in which the Thebans drove their enemies off the field. Initially, the Spartan infantry were sent into disarray when their retreating cavalry hopelessly disrupted Cleombrotus's attempt to outflank the Theban phalanx, and were themselves caught on their flank by Pelopidas and the Sacred Band of Thebes (essentially 1000 pairs of homosexual lovers). The decisive issue was then fought out between the Theban and Spartan foot. The normal practice of the Spartans (and, indeed, the Greeks generally) was to establish their heavily armed infantry in a solid mass, or phalanx, some eight to twelve men deep. This was considered to allow for the best balance between depth (and the pushing power it provided) and width (i.e., area of coverage of the phalanx's front battle line). The infantry would advance together so that the attack flowed unbroken against their enemy. In order to combat the phalanx's infamous right-hand drift (see article phalanx for further information), Greek commanders traditionally placed their most experienced, highly regarded and, generally, deadliest troops on the right wing. By contrast, the shakiest and/or least influential troops were often placed on the left wing. In a major break with tradition, Epaminondas massed his cavalry and a fifty-deep column of Theban infantry on his left wing, and sent forward this body against the Spartan right. His shallower and weaker center and right wing columns were drawn up so that they were progressively further to the right and rear of the proceeding column, in the so-called Echelon formation. The footsoldiers engaged, and the Spartans' twelve-deep formation on their right wing could not sustain the heavy impact of their opponents' 50-deep column. The Spartan right was hurled back with a loss of about 1,000 men, of whom 400 were Spartan citizens, including the king Cleombrotus I. By the time the Theban center and right columns advanced to the point of engaging the enemy, the Spartan right had been devastated. Seeing their right wing beaten, the rest of the Peloponnesians, who were essentially unwilling participants, retired and left the enemy in possession of the field. The arrival of a Thessalian army under Jason of Pherae persuaded a relieving Spartan force under Archidamus not to heap folly on folly and to withdraw instead, while the Thebans were persuaded not to continue the attack on the surviving Spartans. The battle is of great significance in Greek history, and, by extension, world history. Epaminondas not only broke away from the traditional tactical methods of his time, but marked a revolution in military tactics, affording the first known instance of an oblique infantry deployment and one of the first deliberate concentrations of attack upon the vital point of the enemy's line. The new tactics of the phalanx, introduced by Epaminondas, employed for the first time in the history of war the modern principle of local superiority of force. The battle's political effects were also far-reaching: The losses in material strength and prestige (prestige being an inestimably important factor in the Peloponnesian War) sustained by the Spartans at Leuctra and subsequently at the Battle of Mantinea were key in depriving them forever of their supremacy in Greece. Prior to Leuctra, the Spartans hadn’t lost a battle in living memory. Therefore, the battle permanently altered the Greek balance of power, as Sparta was deprived of her former prominence and was reduced to a second-rate power among the Greek city states.
The stage is set. The battle lines are drawn and you are in command. The rest is history. 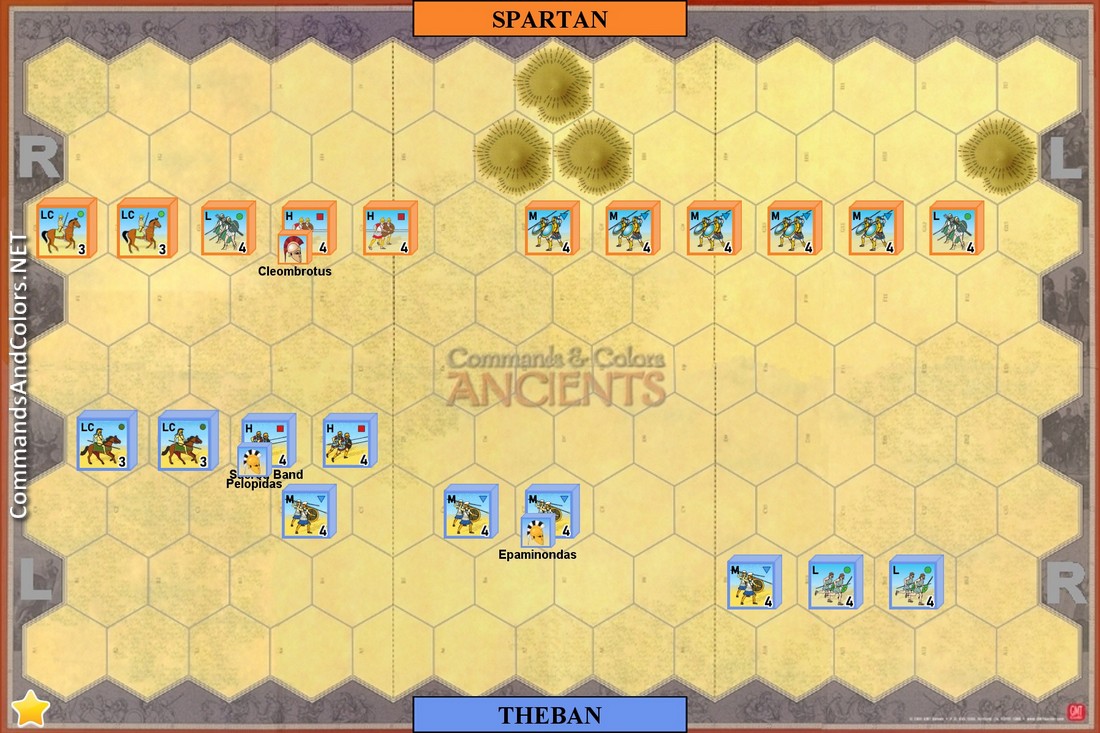