Historical Background
Sparta’s victory over Athens in the Peloponnesian War (431- 404) cemented the reputation of her hoplites as the premier infantry force in the world. However, Spartan arrogance following this victory led to the outbreak of hostilities with her former ally, Thebes. In 371 King Cleombrotos of Sparta marched against Thebes. When he reached Leuctra he found the Theban army barred his way. The Spartans deployed in a long line with their allies on the left. Greek commanders traditionally placed their best troops on the right, and this wing usually led the attack. The brilliant Theban commander, Epaminondas, devised an innovative plan to mass his best men on the left in a 50-man deep phalanx. He intended to meet Spartan shock with super shock. Both sides sent their cavalry out and the Spartan horse were quickly defeated. Seeing his cavalry fail, Cleombrotos ordered his infantry to advance. Simultaneously, Epaminondas’ massed left advanced against the Spartan right, while the rest of his army was ordered to hold back, in an oblique order. The Spartans were attempting to change formation to deal with the situation when the Sacred Band charged and hit them in mid-maneuver. Cleombrotus was killed and the massive weight of the Theban phalanx broke the Spartan line. Never before had Sparta experienced such a defeat, and Leuctra shattered the myth of Spartan military invincibility.
The stage is set. The battle lines are drawn and you are in command. The rest is history. 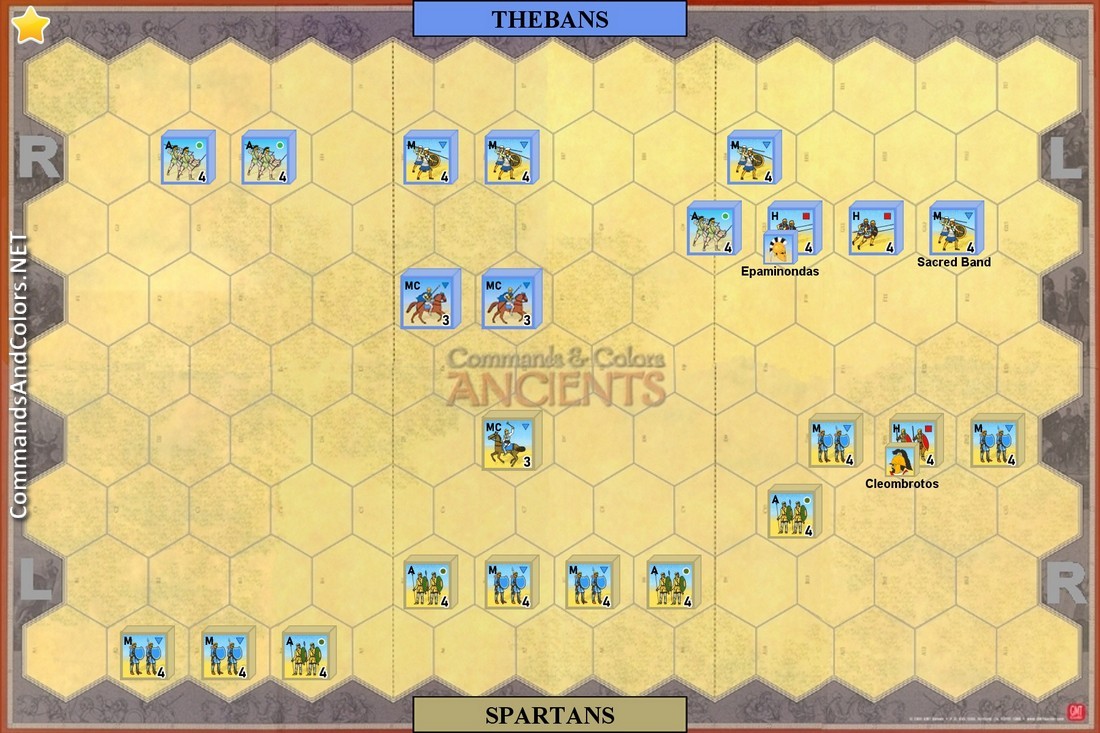 Special Rules
The Theban Sacred Band is a special unit. Place a special unit block in the same hex as the Sacred Band unit to distinguish it from the other units. The Sacred Band will score a hit for each leader symbol rolled in close combat (even when a leader is not attached or adjacent), and may ignore one flag.

clavain replied the topic: #3924 1 year 6 months ago
Played my regular opponent twice. First was a 4-1 Thebes blowout, as despite losing the Sacred Band to a single attack, enlightened leadership on the Theban left followed by two order heavy units cards allowed them to blow through the Spartan right. The rematch was much closer, 4-3 Thebes, as the Spartans managed to form a line and advance. The Theban horse was unsuccessful in its attack against its counterparts, and again the Sacred Band was lost in a single attack, but then both sides traded units. Sparta could have won it with a Line Command and a Medium Infantry attack on a 2 block Auxiliary, but flubbed the roll, allowing the Theban heavies to clean up and win the next turn.
GF1954 replied the topic: #2776 3 years 11 months ago
2 solitaire games. The Spartans winning the first 4 - 2, and the Thebans winning the second, 4 - 0. Both games centeresd on the Spartan right flank. In the first, the Spartans got some fortunate rolls, while in the second, the Thebans attack on that flank had much better success.

The-Admiral replied the topic: #1011 12 years 2 days ago
Iv'e played this with my brother and he won 4-3 with Thebes. My 4 Solitaire games were 3-1 to Thebes, but by coincidence the one game Sparta won was 4-1 and that was the biggest margin of the 5 games.

religon replied the topic: #1010 12 years 2 days ago
Very similar game to OldManRicks won by the Spartans 4-1.

Thebes opened with "Double Time" on the left flank, but it went badly. Sparta responded and rolled up the Theban left. The Spartan MC was the only unit destroyed due to a retreat Flag and a single block casualty.
OldManRick replied the topic: #436 14 years 2 weeks ago
Game Summary:

A very quick game that was virtually over after two cards.

Thebans opened with a Inspired Leadership Left moving the two heavies and mediums up and to the right in order to close on the next turn. The Spartans responded with an Inspired Leadership Right attacking the three rightmost units. The right most Spartan medium infantry damaged the Sacred Band for two blocks taking one loss in return. Cleombrotos' heavy infantry finished off the Sacred Band and then, in the momentum advance attack, completely eliminated the uncommanded Theban Heavy Infantry. They continued to advance to give the Medium Infantry the advantage of leadership in its attack against the Theban Heavies under Epaminondas. The mediums took two blocks from the heavies (one because of the advanced leader) and lost only one in return.

Another two cards on the Spartan right flank saw the elimination of the last Theban heavy and the double retreat of the remaining medium.

The Thebans drove the Spartan Cavalry from the field with a combined attack by both Medium Cavalry and used the momentum advance to attack the Auxiliary in the left center. The Auxiliary held and did two blocks damage. With a "three units" center, the center medium infantry closed with the expended Cavalry and finished it off despite attempted evasion.

Lucky Roll of the game: Obviously, the destruction of the Theban Heavy Infantry significantly changed the force balance on the Spartan right.

Bad move of the game: Possibly the opening card, it put the Spartans in position to strike first and gain superiority on the only flank where they were outnumbered. If the Thebans had attacked the Spartan Cavalry in the center, they would have had the advantage of attacking while the Spartan Cavalry didn't have a retreat path, and with a successful attack, giving themselves both a banner lead and a force size lead in the center. On the other hand, if the Spartans were unable to move in response, Epaminondas was holding two more left flank cards and would have likely crushed the Spartan right.
Read More...