Historical Background
In response to aggressive actions by the Olynthus-led Chalcidian League, in 382 BCE Sparta sent Peloponnesian League forces north under Teleutias which quickly advanced to the city walls of Olynthus and prepared for battle. The Olynthians seized the advantage with a surprise cavalry charge which, according to Xenophon, disrupted the right flank of the Spartan army and very nearly carried the day. However, Derdas of Elimia, commanding veteran cavalry on the Spartan left, seized the initiative by advancing to the open city gate and panicked the Olynthian cavalry who abandoned their charge and raced for the gate and safety, taking severe losses in the process. The outmatched Olynthian infantry conducted an orderly withdrawal to the safety of the city walls, and Teleutias constructed a tropaion and claimed victory.
The stage is set. The battle lines are drawn and you are in command. Can you change history? 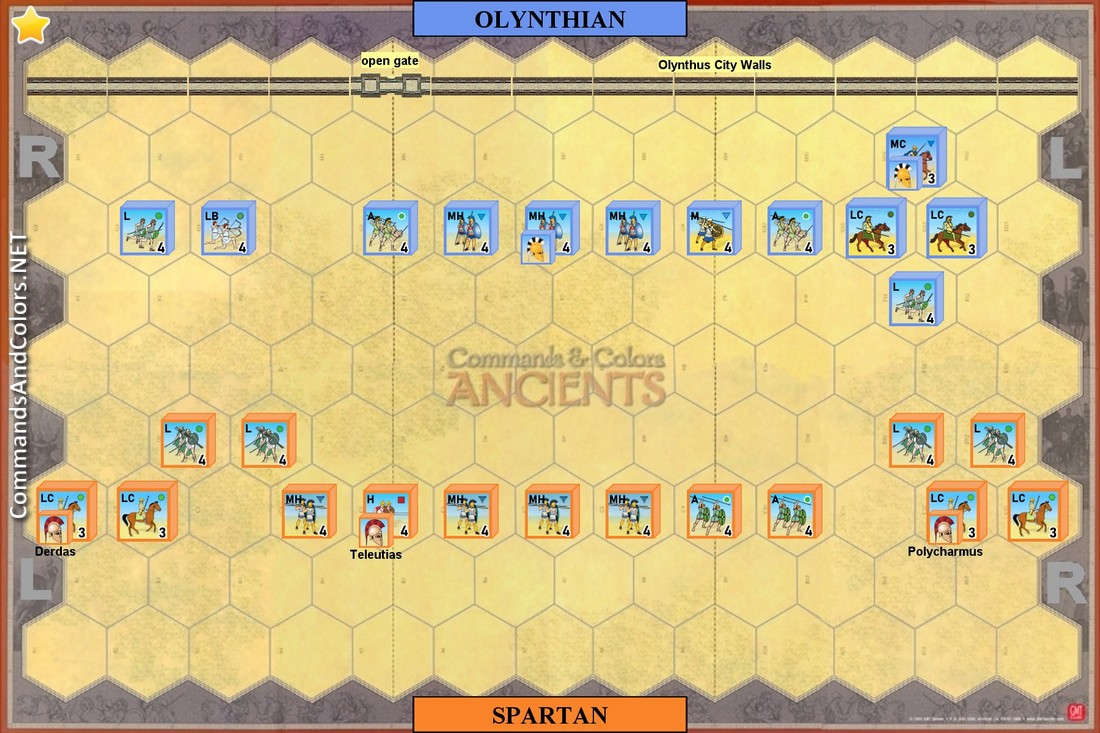 , including Mounted Charge which must be used on turn 1, to reflect the surprise cavalry charge which nearly won the battle in its opening moments.

2. Gameplay
> City Gate: Historically, the Olynthian cavalry abandoned their assault on the Spartan right when their open gate was threatened by a counter-charge led by Derdas and his cavalry. The city gate hex is the only point in the row of wall hexes that the
Olynthian cavalry can retreat through the wall; if that hex is occupied by any Spartan unit, all Olynthian cavalry units are eliminated and removed from the game as  victory banners.

> City Walls: Scalable city wall rules are in effect for the walls of Olynthus.