Historical Background
Despite his defeat at Gela in 405BC, Dionysius, the Tyrant of Syracuse, was able to negotiate a peace treaty with Carthage due to the decimation of their victoroius army by plague. Dionysius used the peace to strengthen his tyranny by the suppression of a revolt, and the extension of his territory. He then set about building up his navy and recruiting a large army of Syracusans, allied Sicilian Greeks and mercenaries from the Spartan dominated Pelopponese. Dionysius was ready to campaign against Punic western Sicily in 398BC and he proceeded to capture the strategically important port city of Motya in the following year after a highly successful siege operation. Carthage responded with an invasion of Sicily and a naval victory over Syracuse at Catane that resulted in them putting Syracuse under siege. But the siege collapsed after another plague ravaged the Carthaginian army, and peace was once more concluded in 392BC.
In 383BC Dionysius began another effort to conquer all of Sicily. In response Carthage sent a large army to the island under the command of Mago, the victor of Catane, with his son Himilco as his deputy. The Carthaginian army numbered over 40,000 men but consisted of a very high proportion of Libyan levies. The smaller but better quality Syracusan army, which totalled about 25,000 men, engaged the Carthaginians on an open plain near the town of Cabala in central Sicily. The Greek hoplites crushed the Punic centre and killed Mago, causing the Carthaginian army to rout with the loss of 10,000 men killed and 5,000 captured. The Carthaginians, now under the command of Himilco, retired to Panormus to lick their wounds and rebuild. By the following year they were ready for a rematch with Syracuse at Cronium.
The stage is set. The battle lines are drawn and you are in command. Cna you change history? 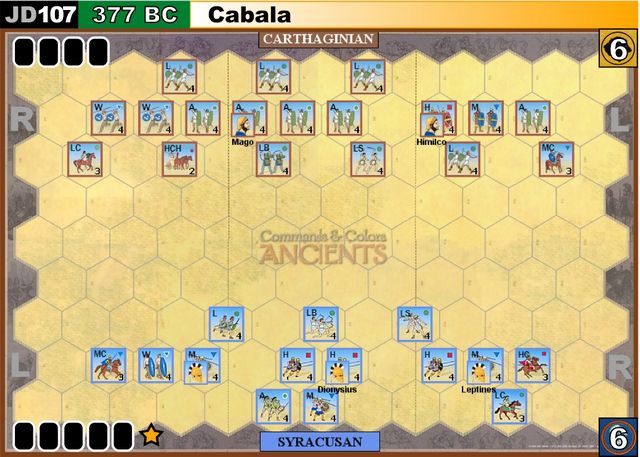