Historical Background
In 397 BC, Carthaginian general Himilco sailed to Sicily with an army of 50,000 men. There he fought several battles with Syracusan tyrant Dionysius. Himilco succesfully reclaimed Motya, captured Messina and eventually laid siege to Syracuse itself. The city of Syracuse was heavily fortified with walls and castles, and Himilco was forced to make his camp on the marshy grounds to the south. Before the winter set in, he built a large walled encampment with access to the sea, and a secondary fort near the temple of Zeus, a little to the west of the main camp.
For many months the siege continued, without a major battle. Then, in the summer of 396, a plague broke out among the Carthaginian forces. Himilco's troops were decimated, and morale and combat effectiveness dropped. Dionysius decided it was time to strike. During a moonless night, he marched his troops around the Carhaginian camp to attack it from the south. Mercenaries and cavalry were sent to attack the main camp directly, but this was just a diversion and a way to get rid of some unreliable allies. Dionysius's cavalry left the mercenaries to their fate and joined the main army, led by Dionusius himself. This army attacked Himilco's fort and all Carthaginian soldiers that were unprepared and undefended in the open field. Meanwhile Dionysius's brother Leptines attacked the Punic fleet.
Many Carthaginians were slaughtered before they could put up a coordinated defense. At the end of the day, the Syracusans had won a decisive victory, although they hadn't managed to take the camp or the fort. Himilco secretly made a deal with Dionysius, who allowed him to escape with only the Carthaginian citizens, in exchange for a payment of 300 talents. Back in Carthage, Himilco took full responsibility for the military debacle, and starved himself to death.
The stage is set. The battle lines are drawn and you are in command. Can you change history? 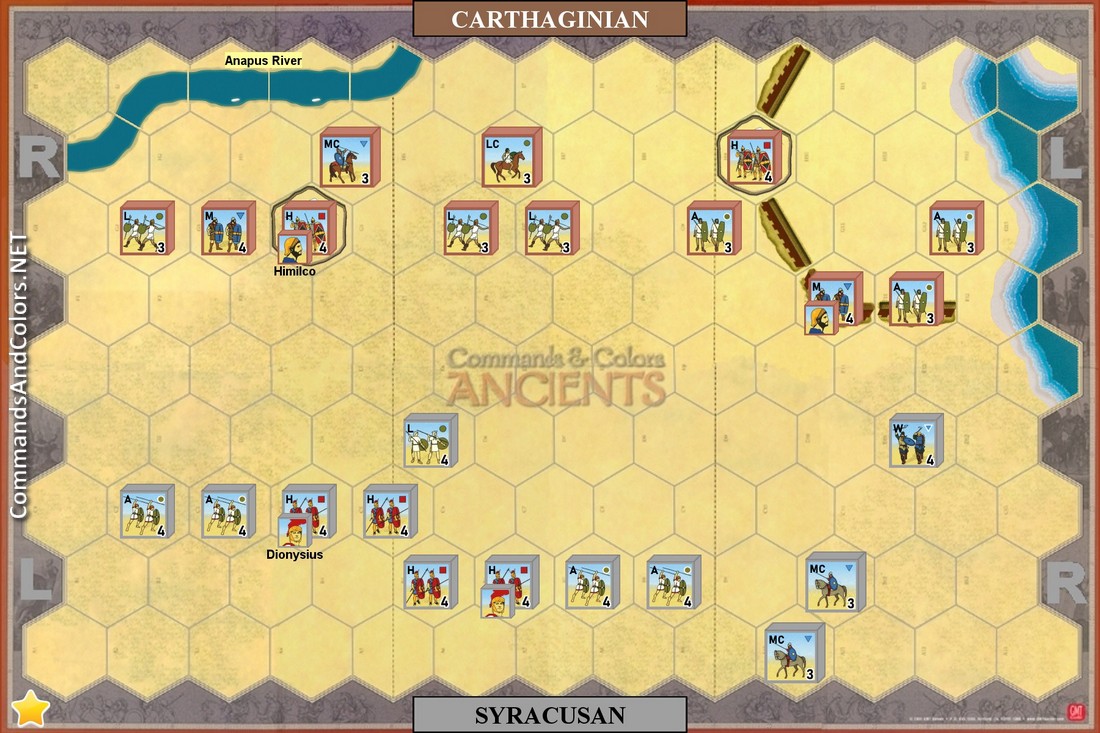 To represent the lowered morale of the Carthaginian troops, all Carthaginian light infantry and auxilia infantry start with 3 blocks instead of 4. The Rally card can restore these units.