Historical Background
Dionysius I of Syracuse, embarked on a conquest of the Greeks of southern Italy. The Italian Greeks formed the Italian League, and when Dionysius put the city of Caulonia under siege the League sent their army of 27,000, under the leadership of the Syracusan exile Heloris, to oppose him.
"The two sides met at the Eleporus River, about 20km east of Caulonia, with the Italians camped alongside the river and the Syracusans about 7km away. Heloris appears to have neglected to send out patrols and remained ignorant of the presence of the enemy. At dawn, he advanced to meet the enemy with himself and 500 elite troops... in the vanguard. Dionysius formed up his troops into a battle-line and..... immediately attacked and took the Italians by surprise while they were still strung out in a marching column; some had still not even left the camp. Heloris and his bodyguard withstood the initial attack briefly, but were soon overwhelmed and wiped out. The other Italians attempted to rush to the rescue but entered the fight in scattered groups and were easily defeated by the formed phalanx of the Syracusans.
The Italians broke and fled. many sought refuge on a nearby hill, where they were surrounded by the victorious Syracusans. The hill.... had no supply of water... and.... eventually thirst forced them to surrender. Over 10,000 prisoners were taken. Dionysius surprised them by releasing them without ransom. He concluded peace with the cities, leaving them all independant. In gratitude, the Italians awarded him gold crowns and believed that this was probably 'the finest act of his life.' "
(Quote is from the book "Tyrants of Syracuse, War in Ancient Sicily Vol I: 480-367 BC" by Jeff Champion)
The stage is set. The battle lines are drawn and you are in command. Can you change history? 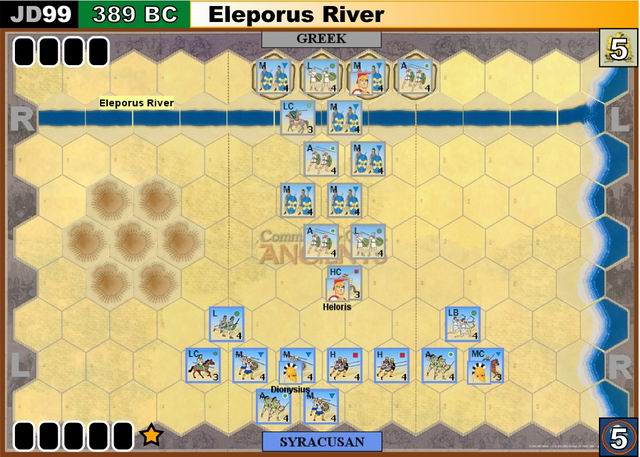