Historical Background
After the 2nd Battle of Himera in 409BC, Hannibal sailed back to Carthage. His departure coincided with the arrival in Sicily of Hermocrates. Hermocrates had been a prominent Syracusan noble. He had been dispatched to Greece with a contingent of Syracusan ships to aid the Spartan fleet against Athens, but the defeat of this fleet at the battle of Cyzicus in 412BC led to him being exiled in Sparta. With financial backing from Pharnabazus of Persia, Hermocrates raised a force of 1,000 mercenaries and set sail to Sicily in five tiremes. On arrival he re-occupied Selinus and recruited malcontents from the displaced peoples of Himera and Selinus. Many western Sicilian Greeks, concerned about the threat of Carthage, along with some of his former supporters from Syracuse also joined his private crusade against Carthage and his army grew to perhaps as many as 6,000 troops.
Hermocrates first moved against the Punic island city of Motya. With the Greek army laying waste to Motyan territory, the Motyan militia along with garrison troops left behind by Hannibal, crossed their causway onto mainland Sicily and offered battle. Hermocrates defeated the Punic army and forced the survivors back to their fortified causeway. Hermocrates repeated this procedure with the same results against the Punic city of Panormus. Flushed with success and Punic booty, he returned to Syracuse in the hopes of taking control. His initial popularity evaporated when he attempted a coup, and he and most of his closest supporters were killed by an armed mob of Syracusan citizens.
The stage is set. The battle lines are drawn and you are in command. Can you change history? 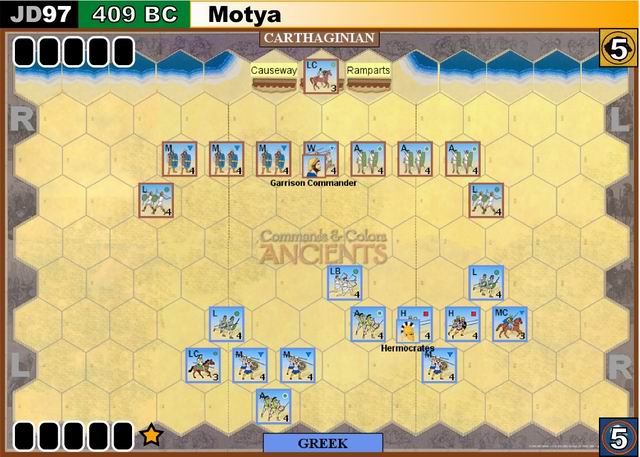 Special Rules
The Greek player scores a banner for each causway rampart hex that one of his/her units currently occupies.