Historical Background
The Battle of Gela took place in the summer of 405 BC in Sicily. The Carthaginian army under Himilco (a member of the Magonid family and kinsman of Hannibal Mago), which had spent the winter and spring in the captured city of Akragas, marched to confront the Greeks at Gela. The Syracuse government had deposed Daphnaeus, the unsuccessful general of the Greek army at Akragas, with Dionysius, another officer who had been a follower of Hermocrates. Dionysius schemed and gained full dictatorial powers. When the Carthaginians advanced on Gela and put the town under siege, Dionysius marched from Syracuse to confront the threat. He planned to use a complex three prong attack plan against the Carthaginians, which failed due to lack of proper coordination. Dionysius chose to evacuate Gela, as the defeat caused discontent in Syracuse and he did not wish to lose his power. Himilco sacked the abandoned city after the Greeks had fled to Camarina.
Wikipedia, the free encyclopedia
The stage is set. The battle lines are drawn and you are in command. Can you change history?

“...Dionysius divided his infantry into three groups, and one division, which he formed of the Sicilian Greeks, he ordered to advance against the entrenched camp of their adversaries with the city on their left flank; the second division, which he formed of allies, he commanded to drive along the shore with the city on their right; and he himself with the contingent of mercenaries advanced through the city against the place where the Carthaginian engines of war were stationed. [5] And to the cavalry he gave orders that, as soon as they saw the infantry advancing, they should cross the river and overrun the plain, and if they should see their comrades winning, they should join in the fighting, but in case they were losing, they should receive any who were in distress; and to the troops on the ships his orders were, so soon as the Italian Greeks made their attack, to sail against the camp of the enemy. When the fleet carried out their orders at the proper time, the Carthaginians rushed to the aid of that sector in an attempt to keep back the attackers disembarking from the ships; and in fact that portion of the camp which the Carthaginians occupied was unfortified, all the part which lay along the beach. [2] And at this very time the Italian Greeks, who had covered the entire distance along the sea, attacked the camp of the Carthaginians, having found that most of the defenders had gone to give aid against the ships, and putting to flight the troops which had been left behind at this place, they forced their way into the encampment. [3] At this turn of affairs the Carthaginians, turning about with the greater part of their troops, after a sustained fight, thrust out with difficulty the men who had forced their way within the trench. The Italian Greeks, overcome by the multitude of the barbarians, encountered as they withdrew the acute angle of the palisade and no help came to them; [4] for the Sicilian Greeks, advancing through the plain, came too late and the mercenaries with Dionysius encountered difficulties in making their way through the streets of the city and thus were unable to make such haste as they had planned. The Geloans, advancing for some distance from the city, gave aid to the Italian Greeks over only a short space of the area, since they were afraid to abandon the guarding of the walls, and as a result they were too late to be of any assistance. [5] The Iberians and Campanians, who were serving in the army of the Carthaginians, pressing hard upon the Italian Greeks, slew more than a thousand of them. But since the crews of the ships held back the pursuers with showers of arrows, the rest of them got back in safety to the city. [6] In the other part the Sicilian Greeks, who had engaged the Libyans who opposed them, slew great numbers of them and pursued the rest into the encampment; but when the Iberians and Campanians and, besides, the Carthaginians came up to the aid of the Libyans, they withdrew to the city, having lost some six hundred men. [7] And the cavalry, when they saw the defeat of their comrades, likewise withdrew to the city, since the enemy pressed hard upon them. Dionysius, having barely got through the city, found his army defeated and for the time being withdrew within the wallsh (Diod. 13.109-110). 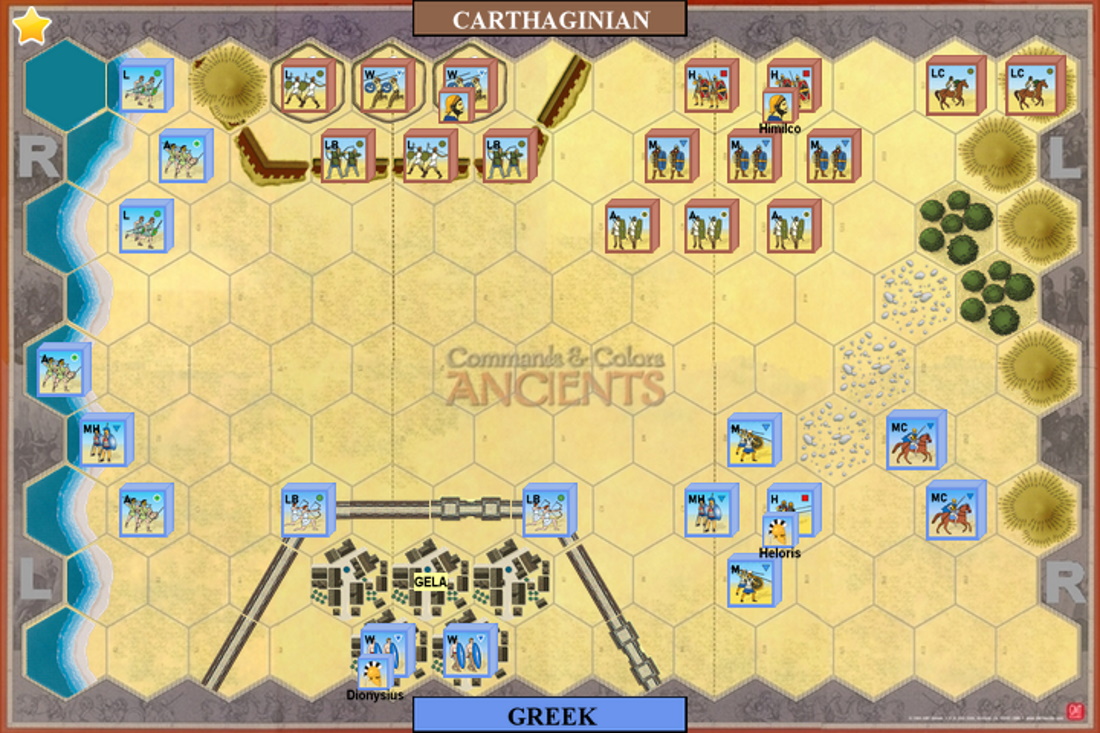