Historical Background
While Agathocles was campaigning against the Carthginians in Africa, Xenodocus, the general of the Acragantines was rebelling against Syracusan rule in Sicily. He succeeded in liberating many Sicilian cities and aroused hopes in Sicily of freedom from the Tyrant Agathocles. With his growing confidence Xenodocus led his army of 10,000 foot and 1,000 horse to meet the Syracusan army of 8,200 foot and 1,200 horse commanded by the generals of Agathocles, Leptines and Demophilus. A bitter fight ensued in which Xenodocus lost 1,500 troops with the rest fleeing back to Acragas.
Later that year, under instructions from Agathocles, Leptines returned with an army to Acragas and defeated a dispirited Xenodocus again, thus ending the Acragantine bid for freedom and forcing Xenodocus to flee to Gela to escape the wrath of his own people.
The actual site of the first battle, on which this scenario is based, is unknown.
The stage is set. The battle lines are drawn and you are in command. Can you change history? 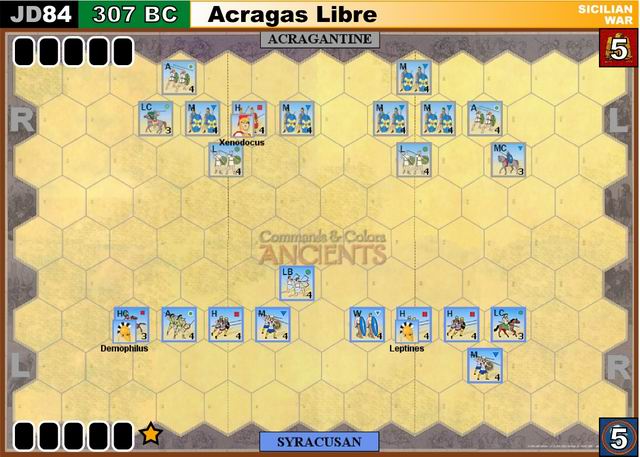