Historical Background
In 317BC, following the death of Timoleon, a mercenary captain, Agothocles, siezed control of Syracuse and became its new tyrant. He embarked on a campaign of conquest in Sicily and Italy, using Syracusan wealth to hire many mercenaries, and killing or exiling all those who opposed him.
Deinocrates, the leader of the Sicilian exiles, appealed to Carthage for help before all of Sicily was under Agathocles' sway. Carthage responded by sending an army to Sicily commanded by Hamilcar. Agathocles responded by sending an army after Deinocrates. Deinocrates was camped outside the friendly city of Galeria with about 3,000 foot and 2,000 mounted soldiers. Agathocles' army also had about 5,000 men and was commanded by Pasiphilus and Demophilus.
The battle was evenly contested until one of the exiles wings collapsed with the death of their general, Philonides. The army of exiles was put to flight with many killed in the ensuing rout and capture of Galeria. Following this victory Agathocles gathered up a large army of Syracusans and mercenaries and marched to do battle with the Carthaginians at Ecnomus hill.
The stage is set. The battle lines are drawn and you are in command. Can you change history? 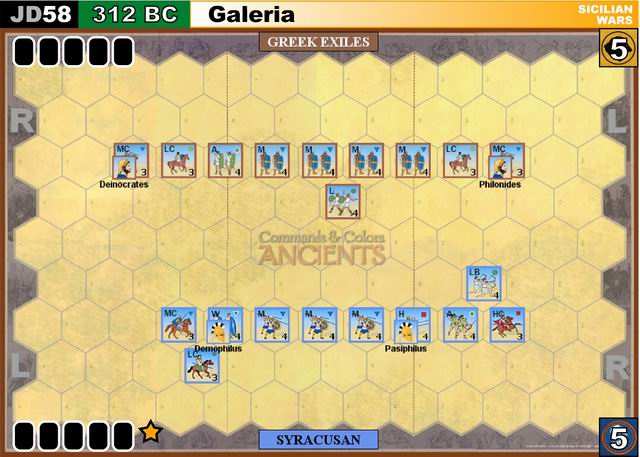