Historical Background
After their victory at the Battle of Ecnomus the Carthaginians put the city of Syracuse itself under siege. Agothocles, in a surprise move, took the fight to the heart of the Carthaginian empire and invaded North Africa by barely avoiding the Carthaginian navy. With the bulk of the Carthaginian army in Sicily Carthage had to raise an army of levies backed by the formaidable sacred band.
The armies met near White Tunis where the field of battle was so narrow the Carthaginians had to deploy in a double line and would struggle to outflank the smaller Syracusan force.
Despite the sacred band the african levies were no match for Agothocles' veteren hoplites and mercenaries. The Carthaginian left flank collapsed and even the Sacred Band retired when Hanno was killed. Agothocles' audacious invasion had succeeded and Carthage itself was now under threat.
The stage is set. The battle lines are drawn and you are in command. The rest is history. 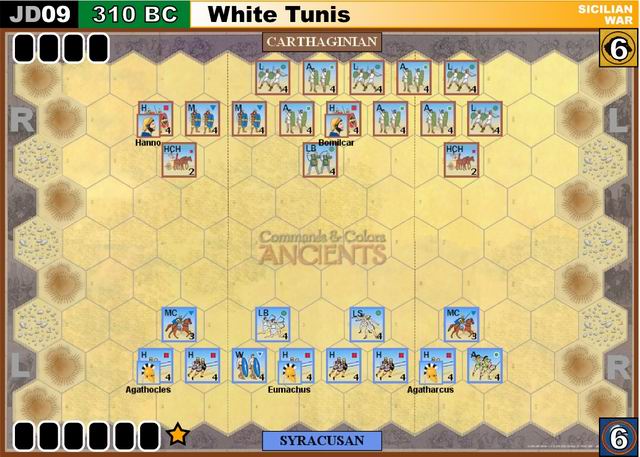 Special Rules
The heavy infantry unit in hex H3 is the Sacred Band.

The Syracusan medium cavalry units only have 1 block each. both units must be eliminated for the Carthaginian player to claim a victory banner.

All Hills and Broken ground hexes are impassable.