Historical Background
Agathocles, Like the Tyrant Dionysius before him, was also keen on conquering all of Sicily. To oppose him Carthage sent an army to Sicily under the command of Hamilcar.
The Carthaginians were camped on Ecnomus hill above the River Himeras when Agathocles with his son Agatharcus decided to attack despite Hamilcars advantageous defensive position. The battle was a close run affair with the Syracusans making good progress until Carthaginian reinforcements under Bomilcar arrived and attacked their flank causing the Syracusans to rout.
The stage is set. The battle lines are drawn and you are in command. The rest is history. 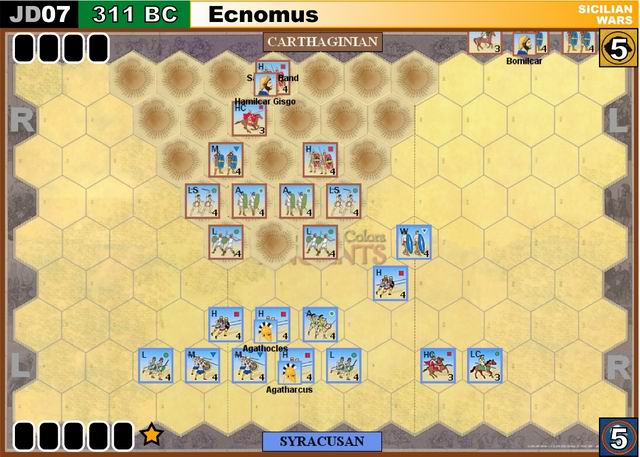 Special Rules
No Syracusan units are allowed in hexes numbered 1 on their first two turns.

During the second Carthaginian "Draw a Command Card" phase that player should draw 2 Command Cards. His/her Command Card deck is now 5 cards for the rest of the game. Also place the following 4 reinforcement units in any 3 Connected hexes numbered 1: 2 Medium infantry units, 1 Light cavalry unit and 1 Leader (Bomilcar). Bomilcar must be placed with one of the infantry units.

The Heavy infantry unit in hex I6 is the Sacred Band.