Historical Background
The Carthaginians learned from earlier defeats in Sicily that they had to field reliable, trained heavy infantry of their own. They formed the Sacred Band, a force of about 2,500 excellently trained Carthaginians, as good or better than the best the Greeks or Syracusans could field. They formed a part of a large army under Hasdrubal, advancing eastward to subjugate Sicily. Opposing him with a much smaller army was the able tactician Timoleon. Ever aggressive, Timoleon anxiously awaited an opportunity to strike the Carthaginians a hard blow on his terms. He got that chance when, on a foggy morning, Hasdrubal carelessly ordered his army to cross the Crimissos River without bothering to send out scouts (who would have reported that Timoleon’s army was arrayed on the bluffs just beyond the river). Waiting until about half of the Carthaginian army had crossed, Timoleon unleashed his excellent heavy infantry phalanx against the surprised Carthaginians. Most who survived fled, but the Sacred Band stood their ground and were annihilated by superior numbers, (aided by a sudden rainstorm that slowed Carthaginian reinforcements crossing the river). Seeing the disaster unfolding across the river, the remainder of Hasdrubal’s army broke and fled. The loss of so many citizen soldiers had a horrific effect on Carthage. The Sacred Band was reformed, but only once was it ever dispatched from Africa again, and then only for a very short campaign.
The stage is set. The battle lines are drawn and you are in command. The rest is history. 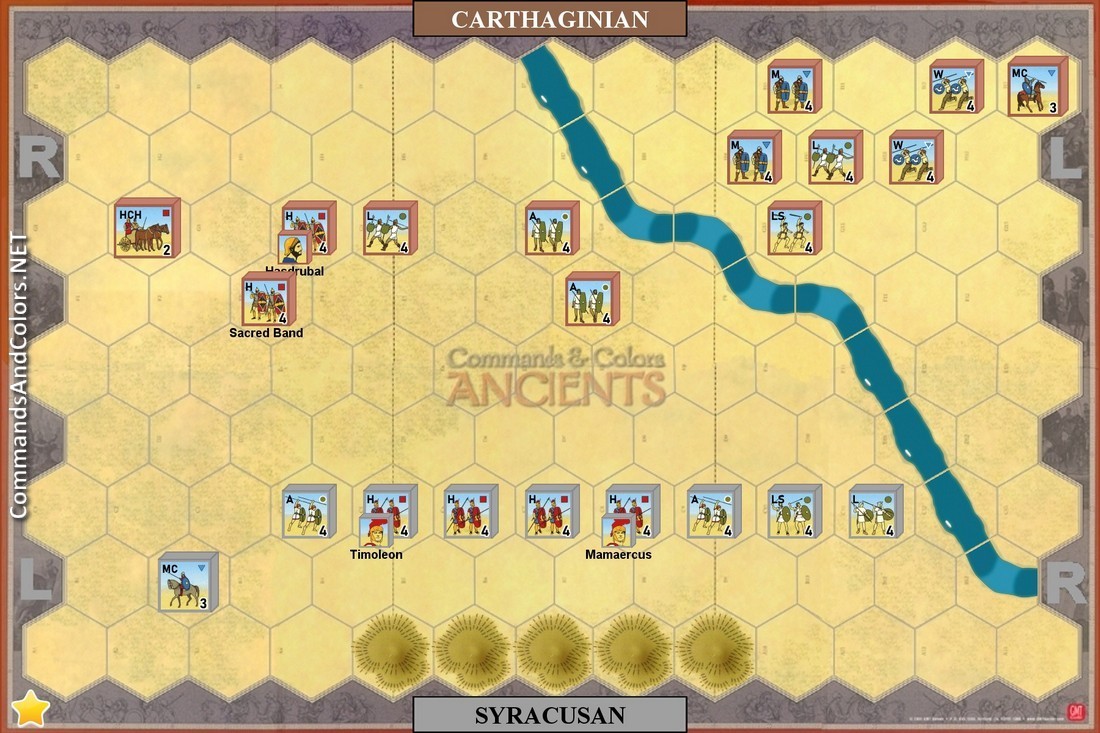 Special Rules
The Crimissos River is fordable only at the five bends in the river.

Dionysius of Omaha replied the topic: #4194 9 months 1 day ago
Crimissos River – 341 B.C.
Brought out the boxes for C&C Ancients… Haven’t played a game of Ancients since October of 2019 and had to review the rules a bit!
Turn 6: Hasdrubal’s Sacred Band is eliminated by a Mounted Charge and the Carthaginian center is broken. Timoleon and the Syracusan army lead 3 to 1.
Turn 8: Hasdrubal charges Timoleon’s line with heavy infantry and chariots. The Syracusans suffer significant casualties.
Turn 9: General Timoleon encourages his men to surge forward and Hasdrubal’s forces take losses of up to 75% before retreating. Carthaginian chariots cover Hasdrubal’s retreat and eliminate one of Timoleon’s heavy infantry units. Both sides tied at three banners each.
Turn 12: The tide seems to be turning against Timoleon on the left flank! And Carthaginian reinforcements are starting to arrive from across the Crimissos River on his right.
Turn 14: Timoleon is forced to turn to his general in the center... General Mamercus commands his heavy troops to push the Carthaginians back across the river. The assault is dramatically successful as his heavy infantry crush a skirmish line of slingers and then continue their momentum forward to liquidate a unit of warriors. The two units eliminated on the same turn gives the Syracusans the win 5 to 4. MVP is Mamercus and his heavy infantry shattering the ranks of the reinforcing Carthaginians near the river.
GF1954 replied the topic: #3922 1 year 6 months ago
Solo, with Carthage winning rather easily 5 - 1. The Syracusans heavies didn't have much luck, as in none, against the two heavies of the Carthaginians. The two mediums got across the river and took out a heavy themselves. Had some real fortuitous rolls for Carthage.
markgravitygood replied the topic: #3436 2 years 6 months ago
This scenario is very card-sensitive. If the Carthaginians don't get a good Left draw and get across the river they are porked. I thought, while playing the Syracusans, I'd take my Left MC and run him down the left side to the fordable river hext at the bottom of the map, but there just is not enough time to do that.

Game 1 Syracuse, 5-3. Carth never got a foothold across the river and met their demise.
Game 2 Syracuse, 5-4. Syracuse had a miracle final turn and took out 2 units, the final unit by needing 3 green circles to kill an evading light infantry, and got it for the win. That's like a 3% shot.

What a great game.

Dylan Dog replied the topic: #1781 6 years 1 month ago
Solo play. First time playing for me. 5 - 3 for the Syracusan.
Anduril replied the topic: #935 12 years 3 months ago
A surprise (and lucky) win for the Carthaginians, when the succeeded in taking out the Syracusan medium cavalry and auxilia on the left flank and two of the heavy infantry and Mamercus in the center - mostly with Hasdrubal's units and some ranged help from the lights while all the medium units sat on the wrong side of the river and watched. But the Carthaginians lost every heavy unit they had winning.

badweasel replied the topic: #380 14 years 3 weeks ago
Solo plays. For these ones, I had been playing with the river rules printed in the rulebook, not the ones updated in the FAQ. As such, holding the river was much easier than it would otherwise be.

Syracuse completely dominated the tempo of this battle. They first turn moved their entire allotment of heavy units Double Time to essentially take control of the river crossing. For the rest of the battle, not a single Carthaginian unit made it across. However, the Carthaginian right flank crushed the opposing cavalry and auxilia. They also managed to severely injure a couple of heavy units, but never managed to eliminate one (even when they only had a single block). Syracusan ranged attacks also proved effective in keeping units away from the river crossing.

Syracuse again had the advantage with a Heavy Unit order that pushed the center phalanx forward. The strategy was similar with them trying to hold the river to prevent crossings. Carthage did not want a repeat of last time so moved the heavy infantry and Sacred Band against the Syracusan phalanx. The initial impact seemed like it might provide the breakthrough needed to get across the river, but the line held and destroyed both the heavy infantry and the Sacred Band. From this point Syracuse used its light ranged fire to pepper the units cross the river to achieve victory. It would take a very aggressive maneuver as well as some luck to get units across the river. Of course in these two plays, Syracuse happened to have orders to quickly push the phalanx forward and shutdown the river (5 dice against 2 is a major imbalance.)

Syracusan hoplites try to bushwack a larger Carthaginian force as it crosses a river. I think the outcome of this scenario depends a lot on the luck of the Syracusan draw; the first time I played it, I got to play two Line Command cards on the first two turns and the result was a lopsided massacre and rout of the Carthaginians.
The second time I played the Carthaginians. My card luck was good and I managed to execute a successful right-flank attack with my Sacred Band heavies and chariots. This destroyed the Syracusan line, but the Sacred Band was nearly wiped out in the process (down to one block). I have to count that as a Carthaginian tactical victory but (given the scenario conditions) actually a strategic defeat for Carthage.
alecrespi replied the topic: #14 14 years 6 months ago
this one is very nice, and also the possibility to see discussions attached to the article.
alecrespi replied the topic: #13 14 years 6 months ago
this is the second official map from GMT CCA base game. Coment it freely here and in the forum.