Historical Background
Phoenicia and Greece both colonized the western Mediterranean. Carthage unified the Punic cities into an empire, while Syracuse rose to become the leading Greek city under its first Tyrant, Gelon. With Theron of Akragas, Gelon took control of Himera and drove out the former ruler, Terillus, in 483. King Hamilcar of Carthage, an ally and friend of Terillus, led an army to Sicily in 480 BC to restore him to power. Hamilcar established two camps to the west and southwest of Himera. As the armies skirmished outside the city, Gelon's raiders captured a message providing the date of arrival of a body of Greek cavalry reinforcing Hamilcar's army. A treacherous plan was hatched to substitute Gelon's own cavalry for these reinforcements. At dawn on the specified day, Gelon's horsemen entered the Punic sea-camp without raising any suspicion. They suddenly attacked, raising havoc and killing Hamilcar. Meanwhile the rest of Gelon’s army launched a surprise attack against both camps. Most of the forces in the sea-camp were slaughtered but a successful counter-attack at the hill camp prevented the total destruction of the Carthaginian army. A peace treaty was signed between Syracuse and Carthage, which held for seven decades. Since Hamilcar’s expedition coincided with the Xerxes’ invasion, it was believed to be part of a coordinated assault on the Greek world.
The stage is set. The battle lines are drawn and you are in command. The rest is history. 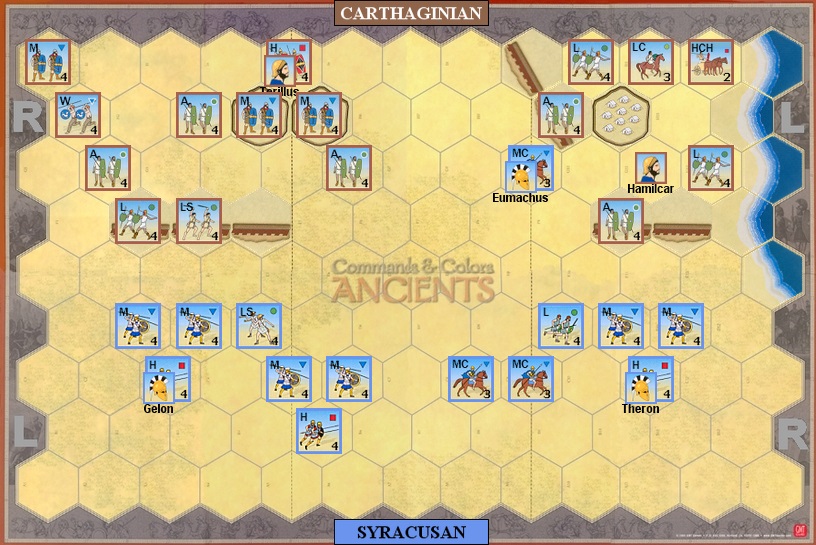 Dionysius of Omaha replied the topic: #4220 8 months 1 week ago
In our game the initial cavalry assault on Hamilcar's camp was a dismal failure. Hamilcar survived, then Terillus took out the Syracusan left flank. Action then migrated to a vicious struggle for the center. The Greeks made a comeback, but then the dice rolls favored the Punic army. Carthage held on to win 6 to 5 after 13 turns. Interesting scenario!
clavain replied the topic: #3907 1 year 6 months ago
6-2 Syracusan. If the sneak attach MC kill Hamilcar and then kill or severely damage another unit on the Carthaginian left (which is what happened in this game) very difficult for Carthage to recover from that.

RiverWanderer replied the topic: #3215 2 years 9 months ago
The FAQ link from 11 years ago is broken. Here is the correct link www.commandsandcolors.net/ancients/the-g...astern-kingdoms.html

Eumachus is Syracusan. The battle opened with a surprise attack by Eumachus and his force inside the Carthaginian camp. The set-up is correct.

generale1964 replied the topic: #832 12 years 6 months ago
The medium cavalry unit image with the Greek leader Eumachus is not correct.
What does this mean?
There isn't mediun cavalry?
The medium cavalry is Carthaginian unit?
There isn't leader?
If anyone can answer me.
Thanks.
Andrea
alecrespi replied the topic: #314 14 years 1 month ago
FAQs present for this scenario. CLICK HERE to read.
Read More...