Historical Background:
The Carthaginians had camped at the top of Ecnomus hill located near the cities of Akragas and Gela in Sicily. After an initial skirmish Agathocles, Tyrant of Syracuse, and leader of the anti-Carthaginian Greeks in Sicily, decided to launch a general attack on the camp with his whole army. “The Greeks had surprise on their side and forced their way into the Punic camp. The Sacred Band , Etuscans, and Greeks (Sicilian Greeks allied to the Carthaginians that is) held, but the remainder of the Punic army was disintegrating. The Carthaginian army was at the point of collapse when Hamilcar employed his secret weapon. The Greek hoplites had lost cohesion in advancing through the camp and were suddenly overwhelmed by a storm of lead bullets hurled by the 1,000 elite Balearic Slingers. The Greek assault faltered and the Punic army rallied. Just then, some reinforcements from Africa arrived at the camp and turned the tide against the Greeks. Agathocles’ army was routed and suffered 7,000 killed, while the victorious Carthaginians lost only 500 men slain. Nonetheless, it had been a very close and bloody battle.” (Taken from the GMT games module ‘Tyrant” pages 25-26 of the rulebook). 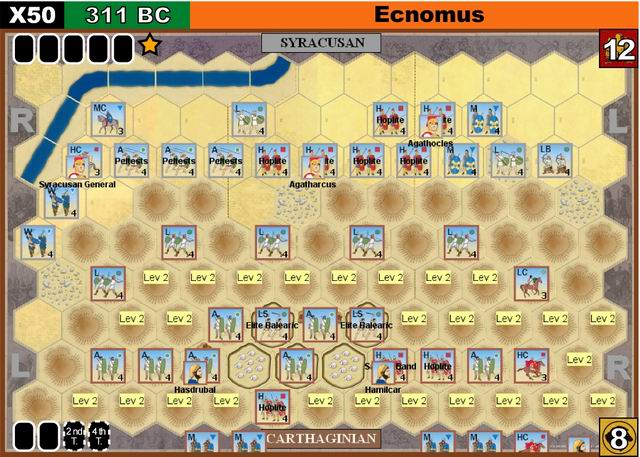 —The Syracusan/Greek side conducts two full Player-turns before the Carthaginian Player conducts his first one, afterwards the two sides’ alternate as normal. The First & Second Syracusan Player –Turns each allow the play of two Command Cards (see below for special Surprise Player-turn rules).

Special Rules:
Command:
A Leader attached (stacked with) a friendly unit may cancel one sword hit on the unit in lieu of canceling a retreat hit.
Agathocles may cancel both a sword and a retreat hit if stacked with a friendly unit.
A unit involved in close combat with the support of a Leader may only count one helmet hit amongst those rolled to inflict a hit on an opposing unit—Exception: Syracusan units supported by Agathocles may count up to two helmet hits.

Card Play:
Players may not utilize a Line Command or Double-Time Card to order infantry units to move up or down a hill level during their ordered move (although they could use the card to order an attack up or down hill). See Special Terrain Rules. A Line Command Card, when utilized by the Carthaginian, may order no more than five units.
1st Turn & 2nd Turn Syracusan Player-turn Surprise Rules:
On his 1st & 2nd player-turns of the scenario the Syracusan Player may play up to two cards, instead of one and use them both to order units/leaders—a given unit/leader may not benefit from or be ordered by more than one card however in the same player-turn. The Syracusan Player, if two cards are played on his Turns 1 & 2, may then draw two new cards at the end of those turns as he moves twice in the scenario before the first Carthaginian player-turn... All Syracusan close-combat attacks on the 1st & 2nd Syracusan Player-turns including vs. evading Carthaginians are at +1 normal dice/card.

Special Units:
Carthaginian Elite Balearic Slingers: The two Carthaginian Light Slinger units in the game have the following advantages:
a) In Battle-back only in close-combat they hit on swords.
b) In Missile fire they hit on swords when the target is one or two hexes away.
c) If the Slinger unit still has two or more blocks it may target an adjacent unit for missile fire as an exception to the normal rules.
d) Their normal retreat distance is only one hex per Flag result accepted or inflicted.
Hoplites: Both sides Heavy Infantry are assumed to be heavily armed and armored Greek warfare fighting style Hoplites—therefore such units always ignore the first sword hit inflicted upon them, except if the unit is in an outflanked position in which case such hits are applied normally. Syracusan Hoplites hit by Balearic Slingers rolling swords in missile fire also never ignore such hits unless an attached Leader cancels them. The Carthaginian Sacred Band unit is treated as a normal Heavy Infantry/Hoplite unit, but starts the game with 5 Blocks instead of the normal four.
Carthaginian Tribal/Mercenaries: Carthaginian Auxillia are assumed to be a ruck of Tribal Levy and light mercenaries. The units are treated as normal Auxillia except:
a) The units have no missile capability
b) Their retreat distance is now 2 hexes instead of 1 hex.
Syracusan Peltests: All Syracusan/Greek Auxillia are assumed to be Peltests—therefore they are allowed to evade per the normal rules if attacked by Carthaginian Heavy, Auxillia, or Medium Infantry only in close combat. Treat as normal Auxillia otherwise
Outflanking---This is an easy way of introducing facing and flanks to the game with little fuss—it can be retrofitted to other scenarios where appropriate:
A unit is said to be “Outflanked” if it is surrounded in all six adjacent hexes by either enemy units, or hexes adjacent to an enemy unit. The presence of friendly units or impassable terrain does not negate an “Outflanked” situation in any way. Units on the board edges (and not surrounded by six adjacent hexes) cannot be “Outflanked”.
Effects of being Outflanked: “Outflanked” units when battling back roll only half the normal number of dice they would be normally entitled to rounded up—to a maximum of only two dice—“Outflanked” units when battling back never hit on helmet rolls even if supported by a leader. A unit’s “Outflanked” situation is judged at the instant it battles back.

Special Terrain Rules:
Level 1 & Level 2 Hill Tiles: The map now, in effect, has contour lines of hexes showing different elevations. Basically there are three Terrain elevations in the scenario: Level 0: which includes all fordable river terrain, and broken ground tiles on the map. Level 1: which includes all Level 1 Hills, and Level 2 which includes all Level 2 Hills. Note: The Camp/Rampart tiles are a special separate case which are handled by the rule detailed below.
Elevation effect on close-combat and battle-back: If a unit is close-combating or battling-back against a unit at a higher elevation (or level) the “normal” maximum dice that unit may use is two (2). If a unit is close-combating or battling-back against a unit at a lower elevation (or level) the “normal” maximum dice that unit may use is three (3). If both units are on the same level and there is no other terrain considerations the units would use their standard dice as dictated by the rulebook and these scenario rules. Broken terrain takes precedence over any elevation considerations in close-combat.
Elevation effect on Line of Sight and Missile Fire: Units firing missiles from a lower level to a target on a higher level have a maximum range of two hexes—the three hex range for light archers and light slingers in this situation may not be utilized.
Line of Sight: A Line of sight is blocked if the line passes through any hexes whose elevation is higher than both the spotting unit and its target. A Line of Sight is also blocked if it passes through two or more hexes of the same elevation and one of the hexes in the line of sight is lower than the two hexes at the same elevation. Examples: A Carthaginian Slinger unit located in hex C8 may not see or fire at a Syracusan unit located in hex F8. A Slinger or Archer in D4 cannot see a unit located in D1.
Carthaginian Camp & Rampart Tiles: The initial Carthaginian Camp/Rampart Tiles only benefit the Carthaginian player—if these hexes are entered by a Syracusan units the Camp/Rampart tile is removed from the map—and replaced by a Level 2 Hill Hex Tile. Each Carthaginian Camp tile so removed scores the Syracusan Player one banner towards victory.. Use the other normal Rampart rules as detailed in the rulebook, however the Rampart may not cancel sword hits inflicted on the defender—and see below for the unfortified Carthaginian Camp tile rules below. Camp/Rampart hex tiles while they exist are assumed to be at the same elevation level as the adjacent Level 2 hill tiles that initially surround the Carthaginian Camp.
Unfortified Carthaginian Camp: The Carthaginian Camp is not really fortified—and the camp tiles merely represent the center of the camp. Carthaginian units battling back from their own camp tiles use one extra dice and the Camp Tiles do block line of sight. This is the sum total of the camp tiles combat effects in the scenario.