Himilco of Carthage vs the Syracusan Tyrant Agathocles

Historical Background:
In a desperate move, with his home base Syracuse under siege by the Carthaginians, Agathocles in 310 BC decided to strike directly at Africa and the very seat of Carthage’s power. Upon his landing in Africa, Agathocles burnt his ships on the beach thereby signaling to his mercenary troops that there was no going back. The Carthaginians decided to immediately move against him, but were defeated in the great battle of White Tunis (310 BC) where their elite Sacred Band took heavy losses. Agathocles spent the next two years expanding his base in Africa, making common cause with the Libyan tribes and towns who had always resented their Carthaginian overlords, and first allying with and then betraying Ophellas, one of Alexander’s old generals, who had brought 10,000 men with him to reinforce Agathocles from faraway Cyrene in a march through the Libyan Desert. In 308 BC Agathocles returned to Sicily to deal with a renewed Carthaginian threat to Syracuse leaving his son to run the overseas kingdom he had carved out of Africa. Early in 307 BC the son, having split the now polyglot African army to counter a set of renewed Carthaginian offensives throughout the country, suffered a series of defeats and ambush. Agathocles, attempting to retrieve the situation, returned to fight a final battle on a plain near Tunis against Himilco the overall Carthaginian commander. The conflict there was fiercely contested, and the Greek mercenary core of the Tyrant’s army managed to nearly break the opposing center of the Carthaginian host, but in the end Agathocles was driven from the field. In the aftermath of that bloody defeat Agathocles’ Libyan allies defected and revolted against him, and the Syracusan Tyrant was finally, in the end, forced to desert the ruins of his army and return home in secret from Africa. 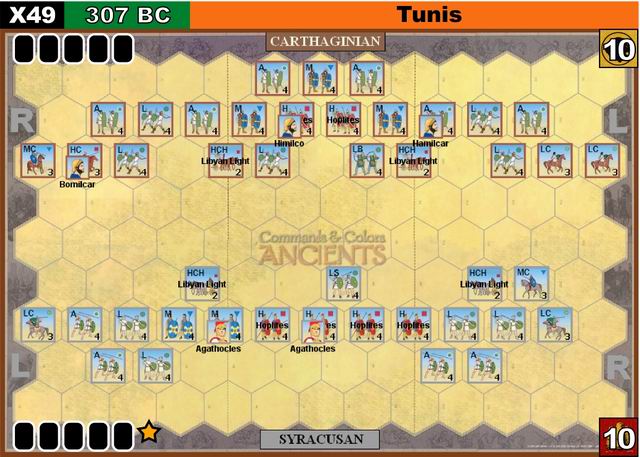 Victory:
For both sides Victory is 10 Banners, however the first Carthaginian Chariot unit eliminated does not count for Syracusan Victory. The Carthaginians also score 2 banners if they eliminate Agathocles (instead of one banner) and one banner if Agathocles evades off the map.

Special Rules:
Command:
A Leader attached (stacked with) a friendly unit may cancel one sword hit on the unit in lieu of canceling a retreat hit.
Agathocles may cancel both a sword and a retreat hit if stacked with a friendly unit.
A unit involved in close combat with the support of a Leader may only count one helmet hit amongst those rolled to inflict a hit on an opposing unit—Exception: Syracusan units supported by Agathocles may count up to two helmet hits.

Libyan Light Chariots: Both sides have Libyan Light Chariot units (use the existing Red Heavy Chariots to represent these) with the following special rules which are modified Chariot rules to represent the Libyan Chariots. :
a) Treat these units in all respects for Command, combat die rolls, and other purposes as if they were Light (green dot) units.
b) Normal Movement is 3 hexes, retreat distance only one hex per Flag result taken
c) Rolls 2 dice normally in close-combat/battle-back and hits on swords for both.
d) Has missile capability—treat as a regular 2 hex range mounted missile unit.
e) Light Infantry, Archers, and Slingers attacked by Libyan Light Chariots in close-combat may not evade.
f) Other than a) to e) treat as a normal chariot unit ignoring first sword hit etc.

Hoplites: Both sides Heavy Infantry are assumed to be heavily armed and armored Greek warfare fighting style Hoplites—therefore such units always ignore the first sword hit inflicted upon them, except if the unit is in an outflanked position in which case such hits are applied normally.

Tribal/Mercenaries: Both sides Auxillia are assumed to be a ruck of Tribal Levy and light mercenaries. The units are treated as normal Auxillia except:
a) The units have no missile capability
b) Their retreat distance is now 2 hexes instead of 1 hex.