Historical Background:
After the Carthaginian defeat at Akragas in 406BC King Himilco-Hanno of Carthage brought up a second army he had camped in the vicinity. Despite the siege of the city of Akragas being broken by the Syracusan success the Greek rank and file were angry at their generals for failing to follow-up the victory with a new attack on the Carthaginian forces and proceeded to stone four of them to death. A little later, due to a Carthaginian victory at sea, Akragas had to be abandoned and the war moved on to the Greek city of Gela in next campaigning season after the winter of 406-405BC. The political backlash among the fractious Greeks of Sicily also threw up a new Tyrant of Syracuse, Dionysius the Elder later known as Dionysius I, who managed to get himself elected, in 405BC, as commander of the Greek Sicilian forces arrayed against Carthage. He ruled Syracuse down through to 366 BC. King Himilco-Hanno had set up a partly fortified camp along the seacoast in front of the city of Gela. Dionysius decided to attack the camp via a surprise amphibious landing of light troops on the part of the camp that fronted the sea. Meanwhile the main Greek heavy phalanxes, split into two separate wings, and a reserve under Dionysius himself, would attack the camp directly by issuing out of the city gates. Initially this somewhat unorthodox combined operation managed to make progress due to the surprise landing. However, the right wing of the phalanxes, commanded by Dionysius’ father in law Heloris, lagged behind and the reserve was still far in the rear at the city gates. The Carthaginian officers and their king had the time and space to rally their forces, and led by elite Campanian and Libyan mercenary units launched an attack on the flanks of the Greek phalanx wings. Dionysius’ army was forced back into Gela and the city fell sometime later to the Carthaginians after its populace was evacuated. 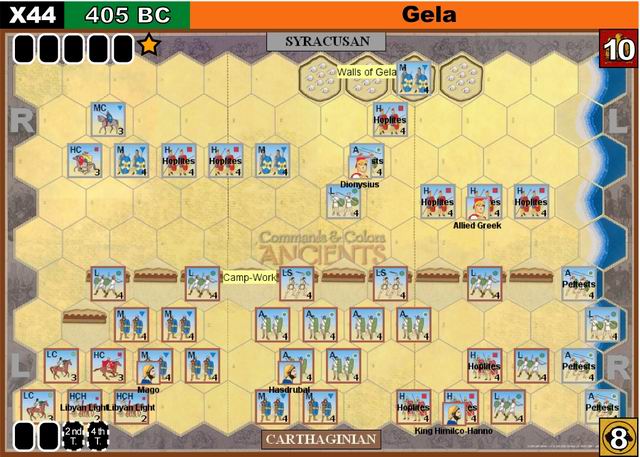 Special Rules:
Command:
A Leader attached (stacked with) a friendly unit may cancel one sword hit on the unit in lieu of canceling a retreat hit.
Dionysius may cancel both a sword and a retreat hit if stacked with a friendly unit.
A unit involved in close combat with the support of a Leader may only count one helmet hit amongst those rolled to inflict a hit on an opposing unit

Special Troop Rules:
Libyan Light Chariots: The Carthaginians have a Libyan Light Chariot units (use the existing Red Heavy Chariots to represent these) with the following special rules which are modified Chariot rules to represent the Libyan Chariots. :
a) Treat this unit in all respects for Command, combat die rolls, and other purposes as if they were a Light (green dot) unit.
b) Normal Movement is 3 hexes, retreat distance only one hex per Flag result taken
c) Rolls 2 dice normally in close-combat/battle-back and hits on swords for both.
d) Has missile capability—treat as a regular 2 hex range mounted missile unit.
e) Other than a) to d) treat as a normal chariot unit ignoring first sword hit etc.
Hoplites: Both sides Heavy Infantry are assumed to be heavily armed and armored Greek warfare fighting style Hoplites—therefore such units always ignore the first sword hit inflicted upon them, except if the unit is in an outflanked position in which case such hits are applied normally.
Tribal/Mercenaries: The Carthaginian Auxillia are assumed to be a ruck of Libyan Tribal Levy and light mercenaries. The units are treated as normal Auxillia except the units have no missile capability
Peltests: All Syracusan/Allied Auxillia are assumed to be Peltests—therefore they are allowed to evade per the normal rules (but see also the coastal hex rules) if attacked by Carthaginian Heavy or Medium Infantry only in close combat. Treat as normal Auxillia otherwise.
Numidian Cavalry : All Carthaginian Light Cavalry need only retreat 2 hexes per retreat result taken—they were defending their own camp.

Special Terrain Rules:
Walls of Gela:
The Fortified Camp tiles in this scenario represent the Walls of the city of Gela---Carthaginian units may never enter such hexes or hexes adjacent to the Walls of Gela. The Carthaginians may attack into hexes adjacent to the walls normally but may never advance after combat into such hexes and may not fire missiles at Syracusan units located directly on top of the Camp/Wall tiles.
Syracusan/Allied Light Foot & Coastal Hex-tiles: Only Syracusan Light Foot may enter coastal hex-tiles—they halt their movement when entering such tiles. All other units, including all Carthaginian units, may not enter such tiles. Carthaginian units may missile fire normally and close-combat at –1 normal dice into such coastal tiles when attacking Syracusan Light Foot. In lieu of normal retreating or evasion Syracusan Light Foot may retreat or evade into coastal tiles—a retreat or evasion that ends in such a tile satisfies fully any retreat hit or evasion requirements for the unit—the retreat/evasion always stops in the first coastal hex entered. Syracusan Light Foot located in a coastal hex and ordered
by a section or light troops card may in lieu of moving and/or attacking be naval evacuated: simply remove the unit from play—it does not count as eliminated for Victory purposes. Evacuated units may not re-enter the game.
Carthaginian Camp-work Lines:
The Ramparts Tiles represent the Carthaginian camp lines near the city. Ignore the normal rampart rules. Ordered Syracusan units/leaders may only enter such tiles & stop via movement that starts from an immediately adjacent hex or via a momentum advance after combat. Syracusan Cavalry & Carthaginian Light Chariot units may never enter or attack into such hexes. Once a Syracusan unit enters a camp-work tile it is removed from play and the hex reverts to clear terrain for the remainder of the scenario. Carthaginian units, which are not in an outflanked condition, defending in campwork tiles, add one dice when battling back only. Campwork tiles do not block line of sight. Syracusan Auxillia/Light Infantry missile firing at Carthaginian units on campwork tiles do so at only one dice regardless of whether or not they have moved