Historical Background:
Cabala was a great battle fought on a plain in central Sicily between the massive forces commanded by Dionysius I, Tyrant of Syracuse, and Mago of Carthage. Each side probably had from 25,000 to 40,000 men or more on the field. The Syracusan phalanx stove in the Punic center and Mago fell fighting whilst trying to rally his troops. Upon his death the Carthaginian army, supposedly the largest one ever sent to Sicily from Carthage to date, immediately fell apart and the combat devolved into a borderline massacre. The annals claim 10,000 Carthaginian mercenaries and allies killed along with 5,000 more captured. The remains of the Carthaginian army retreated to Panormus (modern day Palermo) on the north coast of the island while Dionysius consolidated his hold over the interior Sicilian towns. 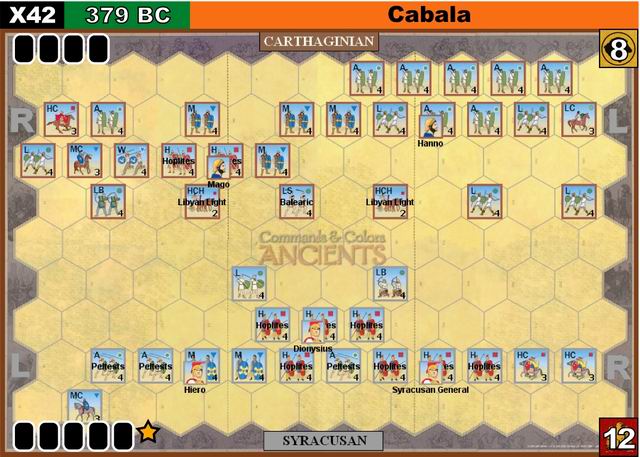 Victory: Carthaginian: 8 Banners Syracusan/Allied: 12 Banners—but the first loss of a chariot unit is ignored for these purposes and 2 Banners are scored for eliminating Mago.

Special Rules:
Command:
A Leader attached (stacked with) a friendly unit may cancel one sword hit on the unit in lieu of canceling a retreat hit.
Dionysius may cancel both a sword and a retreat hit if stacked with a friendly unit.
A unit involved in close combat with the support of a Leader may only count one helmet hit amongst those rolled to inflict a hit on an opposing unit

Special Troop Rules:
Libyan Light Chariots: The Carthaginians have a Libyan Light Chariot unit (use the existing Red Heavy Chariots to represent these) with the following special rules which are modified Chariot rules to represent the Libyan Chariots. :
a) Treat this unit in all respects for Command, combat die rolls, and other purposes as if they were a Light (green dot) unit.
b) Normal Movement is 3 hexes, retreat distance only one hex per Flag result taken
c) Rolls 2 dice normally in close-combat/battle-back and hits on swords for both.
d) Has missile capability—treat as a regular 2 hex range mounted missile unit.
e) Other than a) to d) treat as a normal chariot unit ignoring first sword hit etc.
Hoplites: Both sides Heavy Infantry are assumed to be heavily armed and armored Greek warfare fighting style Hoplites—therefore such units always ignore the first sword hit inflicted upon them, except if the unit is in an outflanked position in which case such hits are applied normally.
Tribal/Mercenaries: The Carthaginian Auxillia are assumed to be a ruck of Libyan Tribal Levy and light mercenaries. The units are treated as normal Auxillia except:
a) The units have no missile capability
b) Their retreat distance is now 2 hexes per Flag taken instead of 1 hex.
Peltests: All Syracusan/Allied Auxillia are assumed to be Peltests—therefore they are allowed to evade per the normal rules if attacked by Carthaginian Heavy or Medium Infantry only in close combat. Treat as normal Auxillia otherwise.
Balearic Slingers:The Carthaginian Slinger unit is assumed to be made up of elite Balearic Slingers—This unit hits on swords when missile firing at Syracusan Light Foot.