Historical Background
The inhabitants of Motye, expecting aid from the Carthaginians, were not dismayed at Dionysius' armament, but made ready to withstand a siege... This city was situated on an island lying six stades off Sicily, and was embellished artistically to the last degree with numerous fine houses, thanks to the prosperity of the inhabitants. It also had a narrow artificial causeway extending to the shore of Sicily, which the Motyans breached at this time, in order that the enemy should have no approach against them. ... Accordingly, Dionysius, at once put many times more men on the task of filling up the strait between the city and the coast, and, as the mole was extended, advanced his engines of war little by little toward the walls. ...After Dionysius had completed the mole by employing a large force of labourers, he advanced war engines of every kind against the walls and kept hammering the towers with his battering-rams, while with the catapults he kept down the fighters on the battlements; and he also advanced against the walls his wheeled towers, six stories high, which he had built to equal the height of the houses. The inhabitants of Motye, now that the threat was at hand-grips, were nevertheless not dismayed by the armament of Dionysius, even though they had for the moment no allies to help them. Surpassing the besiegers in thirst for glory, they in the first place raised up men in crow's-nests resting on yard-arms suspended from the highest possible masts, and these from their lofty positions hurled lighted fire-brands and burning tow with pitch on the enemies' siege engines. The flame quickly caught the wood, but the Sicilian Greeks, dashing to the rescue, swiftly quenched it; and meantime the frequent blows of the battering-rams broke down a section of the wall. Since now both sides rushed with one accord to the place, the battle that ensued grew furious. For the Sicilian Greeks, believing that the city was already in their hands, spared no effort in retaliating upon the Phoenicians for former injuries they had suffered at their hands, while the people of the city, envisioning the terrible fate of a life of captivity and seeing no possibility of flight either by land or by sea, faced death stoutly. And finding themselves shorn of the defence of the walls, they barricaded the narrow lanes and made the last houses provide a lavishly constructed wall. From this came even greater difficulties for the troops of Dionysius. For after they had burst through the wall and seemed to be already masters of the city, they were raked by missiles from men posted in superior positions. Nevertheless, they advanced the wooden towers to the first houses and provided them with gangways; and since the siege machines were equal in height to the dwellings, the rest of the struggle was fought hand to hand. ...In the end, while the kind of siege we have described had lasted some days, Dionysius made it his practice always toward evening to sound the trumpet for the recall of the fighters and break off the siege. When he had accustomed the Motyans to such a practice, the combatants on both sides retiring, he dispatched Archylus of Thurii with the elite troops, who, when night had fallen, placed ladders against the fallen houses, and mounting by them, seized an advantageous spot where he admitted Dionysius' troops. The Motyans, when they perceived what had taken place, at once rushed to the rescue with all eagerness, and although they were too late, none the less faced the struggle. The battle grew fierce and abundant reinforcements climbed the ladders, until at last the Sicilian Greeks wore down their opponents by weight of numbers. ...Straightway Dionysius' entire army burst into the city, coming also by the mole, and now every spot was a scene of mass slaughter; for the Sicilian Greeks, eager to return cruelty for cruelty, slew everyone they encountered, sparing without distinction not a child, not a woman, not an elder. Dionysius, wishing to sell the inhabitants into slavery for the money he could gather, at first attempted to restrain the soldiers from murdering the captives, but when no one paid any attention to him and he saw that the fury of the Sicilian Greeks was not to be controlled, he stationed heralds to cry aloud and tell the Motyans to take refuge in the temples which were revered by the Greeks. When this was done, the soldiers ceased their slaughter and turned to looting the property... After this success he rewarded Archylus, who had been the first to mount the wall, with one hundred minas, and honoured according to their merits all others who had performed deeds of valour; he also sold as booty the Motyans who survived, but he crucified Deimenes and other Greeks who had fought on the side of the Carthaginians and had been taken captive.
[Diodorus Siculus, 14.48-14.53] 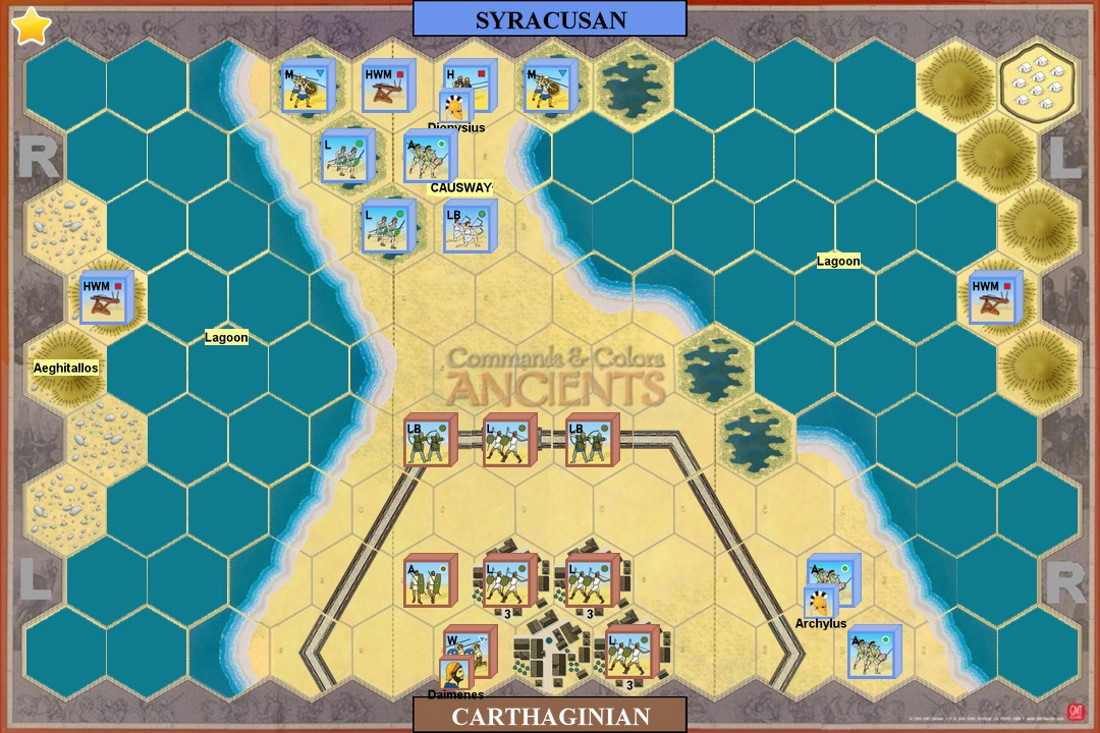 Victory
6 banners
For Syracusan player at least one victory banner must be from an occupied town hex.

The three Carthaginian Light Infantry units are Civilians. Because of low quality of military experience and of poor quality of individual weapons, these three units start the battle with only 3 pieces.

A Greek unit that captures (enters) a town hex gains one Victory Banner for the Syracusan player. The unit must stop on the hex, not just move through the hex. A town hex may be only captured once, and when the Victory Banner is gained it may not be lost.