Historical Background
"Following his stupendous victory at the Crimissos River, Timoleon next launched a war to suppress tyranny in Sicily. Timoleon targeted his recent allies, Hicetas, tyrant of Leontini, and the Campanian mercenary captain Marcus Mamercus.......Timoleon's attacks drove these two petty tyrants into alliance with Carthage. The general Gisco, son of Hanno, had been recalled from exile to take the command in Sicily following the disaster at Crimissos. Lacking a large field army, Gisco welcomed the overtures of Hicetas and Mamercus. Gisco supplied these surrogate armies with funds and mercenary auxiliaries, and let them carry on the war. Timoleon moved first against Hicetas. However, while Timoleon with a small part of his army was engaged in an expedition against Caluari, 15 miles north-west of Syracuse, Hicetas appeared with his entire force. Hicetas taunted the Syracusans, and then occupied a strong position on the banks of the Damurias River. Timoleon's outnumbered men clamored to attack, so Timoleon led them across the river to an improbable victory. Soon thereafter, he captured Hicetas alive, and had him executed for the crime of Tyranny."
The above quote is the first paragraph to the description of the GBoH Battle of Abolus River scenario in the Tyrant module by Daniel A. Fournie.
The stage is set. The battle lines are drawn and you are in command. Can you change history? 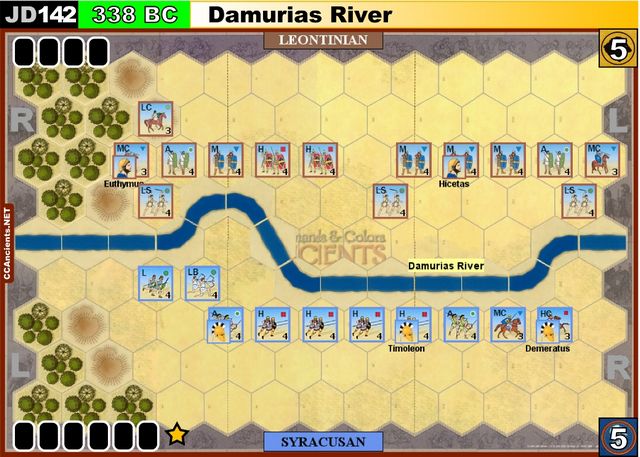 Special Rules
The Damurias River is fordable with no battle dice reductions.