Historical Background
Following the Devastating Carthaginian defeat at Syracuse in 396 BC, Dionysius took to the offensive. He forced most of the Sicels back into alliance with Syracuse and captured the Punic towns of Cephaloedium and Soluntum. Then, in 394 BC, the city of Rhegium attacked his allies at Messana. Although the assault failed, Dionysius determined to conquer Rhegium.In order to clear the coastal route towards Rhegium, Dionysius attacked the Sicel held city of Tauromenium, but with his siege of the place extending into the winter, he launched a surprise assault on a dark and stormy night. The attack was a complete failure and he lost 600 men and almost his own life. Further setbacks occurred when Acragas and Messana renounced their alliances with him.
Mago, the new Carthaginian commander in Sicily, saw this as a chance to regain Punic influence in the east of the island. Lacking funds and troops due to plague and revolt back in North Africa, he raised a local army of allied Greeks and Sicilians, along with Greeks exiled by Dionysius to augment what few african garrison troops he posessed. Mago marched east against Messana. He maybe hoped to turn the recent Messanian dissafection with Dionusius into an alliance with himself, bu Messana stood firm, and when the Syracusan army approached, he withdrew to a camp outside the allied city of Abacaene. The two sides now fought a battle in which Dionysius was victorious. The Carthaginians lost 800 men and were forced to take refuge in Abacaenum. Dionysius had plans for a naval attack on Rhegium, and so with the Carthaginian incursion blunted, he returned to Syracuse. His naval adventure failed, but Mago had had enough and the Carthaginians returned west. The war would end in treaty the following year after an inconclusive standoff between Dionysius and Mago at the Chrysas River.
The stage is set. The battle lines are drawn and you are in command. Can you change history? 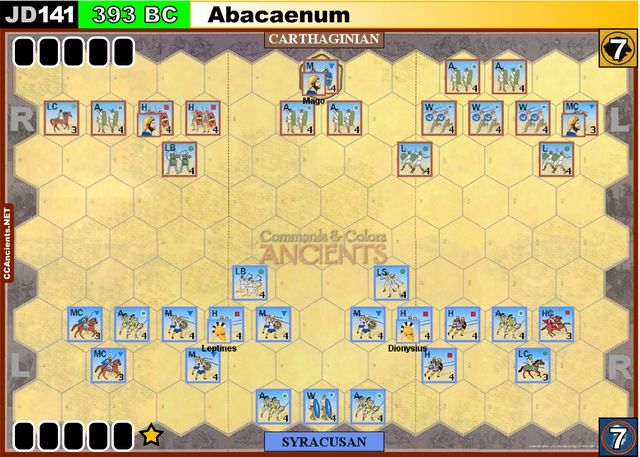