Historical Background
In 446 BC Ducetius defied his Corinthian exile and returned to Sicily along with a group of colonists. On arrival he founded the city of Cale Acte on the northern shore of the island. The Acragantines had been angered when their Syracusan allies had exiled Ducetius without referring to them, as it had been their territory which had been attacked by Ducetius. When Syracuse would do nothing to enforce their exile ruling on Ducetius, the furious Acragantines declared war. It seems that the Syracusans took the initiative, as the two armies met at the Himera River not far to the East of Acragas. As in 472 BC, the Syracusans were victorious with over 1,000 Acragantines killed in the battle. The two cities now formalised an alliance, which must have recognised Syracuse as the hegemonic city.
Meanwhile, the man who had started all the trouble, Ducetius, was once again trying to unite the Sicels, but with his death in 440 BC through illness, his dream of a Sicel nation collapsed forever.
The stage is set. The battle lines are drawn and you are in command. Can you change history? 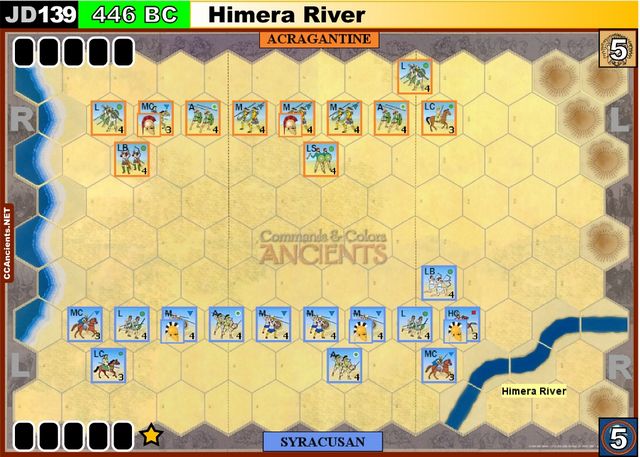