Historical Background
In the mid 5th Century BC, a man named Ducetius combined the Sicel tribes of central eastern Sicily into a unified federation. In 460 BC he even aided the city of Syracuse, and together they conquered the Greek city of Catana and divided up its territory. However, in 451 BC, the Sicels attacked the town of Motyum in the territory of the city of Acragas. Acragas appealed for help from their Syracusan allies and a joint army from both cities marched to the relief of Motyum under the command of the Syracusan General Bolcon. The two armies camped near Motyum in separate camps. Ducetius, observing the Greek division, struck on a plan to launch a surprise attack on them early in the morning before they were ready for battle. The unprepared Greeks were overun by the numerically inferior Sicels, and the Greeks broke and fled into the woods near their camps. With the relief effort thwarted, Motyum was captured.
In an attempt to excuse their embarrasing defeat to the Sicel hill tribesmen, the Syracusans accused Bolcon of conspiring with Ducetius to arrange the ambush. Bolcon was convicted and executed. Both Syracuse and Acragas would raise fresh armies and defeat Ducetius the following year.
The stage is set. The battle lines are drawn and you are in command. Can you change history? 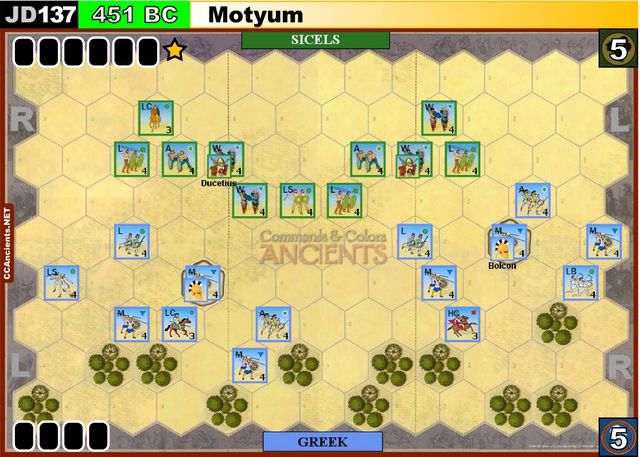 A Sicel unit that occupies a Greek camp hex at the start of the Sicel player's turn may remove the camp tile and gain one Victory Banner.

Due to surprise, on the first Sicel turn, all Sicel units attack with an extra dice.