Historical Background
After their great victory at Himera against the Carthaginians in 480 BC, the Sicilian Greeks had a short period of peace under their principle tyrants, Gelon of Syracuse and Theron of Acragas. However, on their deaths they were succeeded by more despotic and ambitious heirs, Hiero and Thrasydaeus respesctively.  Thrasydaeus was in the process of raising a large army, which according to Diodorus, was 20,000 strong. F. E. Ray believes that as this was the strength of the combined army of Syracuse and Acragas at Himera, the total was probably closer to 10,000. He estimates it consisted of 4,000 Acragantine and Himeran hoplites, 6,000 mercenary hoplites, 1-2,000 slingers and archers and 400 cavalry. His figures for the Syracusan army are 6,000 Syracusan and allied hoplites, 4,000 mercenary hoplites, 1,000 slingers and archers and 2,000 cavalry.
Hiero wished to catch Thrasydaeus while he was still assembling his army, and so marched quickly to Acragas. Thrasydaeus, caught by surprise, assembled his army and the two sides met on an open plain east of Acragas. A fierce struggle ensued in which Hiero was the clear victor, probably due to his massive superiority in cavalry. The Acragantines retired to their city, exiled Thrasydaeus (who was later executed), and made peace with Hiero. This victory elevated Syracuse to the leading city in Sicily.
(Based on the book "Land Battles in 5th Century B.C. Greece by Fred Eugene Ray.)
The stage is set. The battle lines are drawn and you are in command. Can you change history?

Note
The following quote from the cited book shows why I have used heavy infantry to represent the city militias and medium infantry for the mercenaries: "Note that professional hoplites were not preferable to citizen soldiers at this time, since, .....all Greek yeomen knew the basics of spear fighting. The militia's superior motivation and organization thus made it better qualified for the honoured right-wing position." 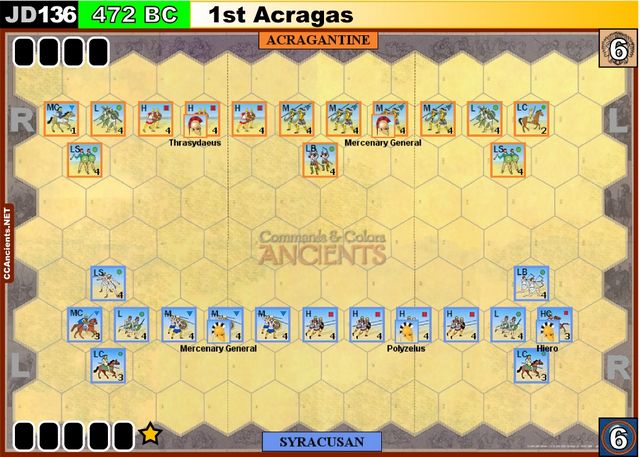