Historical Background
After the Battle of Pylos, a force of Spartan soldiers was isolated on the island of Sphacteria. Demosthenes, commanding the force at Pylos, initially planned to starve the Spartans out, but it became clear over time that the Spartans would be able to hold out. He requested reinforcements from Athens. Cleon, with an Athenian expeditionary force, landed and moved inland, harassing the Spartans with missile fire whenever they attempted to advance to battle. The frustrated Spartans withdrew to the northern end of the island, where they waited behind their fortications. A stalemate took place for some time, until an Athenian force burst into the Spartan rear using a route along the island’s shore that had been left unguarded because of its roughness. The Spartans abandoned their defenses after Epitadas, their commander, was killed. Styphon, now in command, ordered his surrounded men to throw down their shields and surrender. The mystique of Spartan invincibility was shattered.
The stage is set. The battle lines are drawn and you are in command. Can you change history? 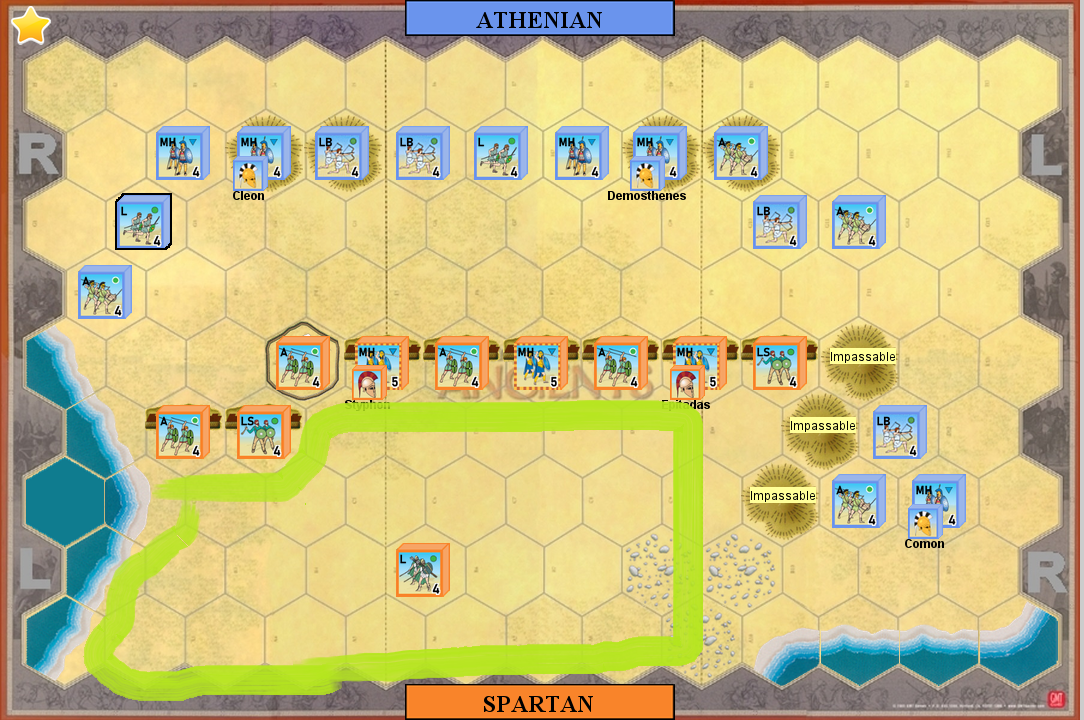 Mark-McG replied the topic: #3966 1 year 3 months ago
so I have updated the map with the correct unit, and indicated in green crayon where I think the victory area is.
haslo replied the topic: #3579 2 years 1 month ago
The map above and the map in the Vassal module have an error - the second unit from the left shouldn't be a Medium Infantry, but a Light Infantry. It's a Light Infantry in my paper scenario book (1st Edition), and the unit breakdown below the map also lists two L and no M units.

The-Admiral replied the topic: #3401 2 years 4 months ago
I have raised the following question with GMT:
"In the scenario 'Sphacteria - 425 BC' from the Spartan expansion, the Special Rules state that the Athenian player gains a victory banner for each "terrain hex" occupied. Is that any of the 27 hexes behind the ramparts and on the left and centre map, or only the 2 hexes that contain actual terrain (broken ground) tiles?"
The use of 'terrain hex' rather than just 'hex' leads me to believe it is just the two eligible broken ground hexes, but the last sentence of the rule has me doubting?
Read More...