Historical Background
A Spartan expeditionary force led by the navarch Cnemus slipped across the Gulf of Corinth in 429 BCE to assist an Ambraciot attack on Acarnania as a part of the ongoing phase of the Peloponnesian War known as the Archidamian War, which had begun two years earlier in 431.
After organizing and assembling his composite force of Spartans, Ambraciot and Anactorian hoplites, and 1000 Chaonian “barbarians”, Cnemus set off to invest the city of Stratus, the largest city in Acarnania.  By moving quickly against the largest city, Cnemus hoped to intimidate all of Acarnania into abandoning their Athenian loyalties.  However, Cnemus’ haste, including failing to wait for additional reinforcements from land and sea, would spell doom for the expedition.
Advancing on Stratus in three different columns, Cnemus placed his barbarian allies in the center, with his Peloponnesians and Ambraciots under his command on the left and the Anactorians on the right.  However, the three divisions became spread out and lost sight of one another as they moved toward their objective, with the hoplites advancing at a much slower pace than the overconfident Chaonians, who likely hoped to achieve the glory of storming Stratus themselves.
The Stratians were perfectly positioned for such a disjointed advance, and ambushed the unsuspecting Chaonians outside the city walls.  Waves of panic instantly engulfed the barbarians, who were now too far ahead of their Hellenic allies.  The Chaonians retreated in the face of the Stratian assault, and raced away from the city until they rejoined the other divisions.  The Stratians and their renowned slingers were content to keep the combined force at bay from a distance until nightfall, when Cnemus retreated, returning the next day under truce to remove the dead.  Shortly thereafter, the Peloponnesians returned home, and the Stratians placed a trophy to mark their victory.
The stage is set. The battle lines are drawn and you are in command. Can you change history? 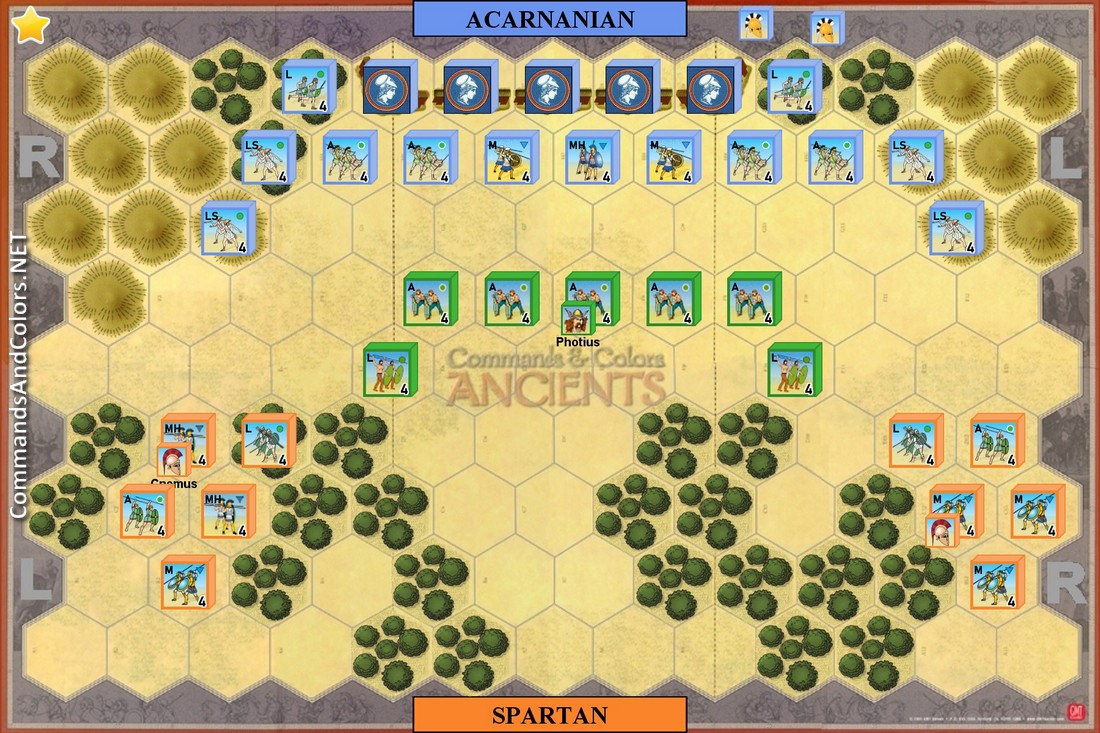 > Acarnanian player gets to review their command cards, then place their two leaders on the board before turn one.

> Spartan player immediately receives a banner for each of the five hexes within  Stratus they occupy.  If regained by Arcananians, banners are lost individually.