Historical Background
As the scope of the Peloponnesian War continue to widen during the second decade of the conflict, the Spartan general Brasidas led an expeditionary force to the “legs” of Chalcidice, three peninsulas that stick into the the northwestern Aegean Sea.  As a part of a wider campaign to engage the support of northern Greeks to the Spartan cause, Brasidas sought also to remove city-states from the Athenian-dominated Delian League.
In 423 BCE, through intimidation and diplomacy, Brasidas was able to convince Mende and Scione to revolt against the Delian League.  Although this gave Sparta important strongholds along the crucial Black Sea trade route, the actions caused Athens to immediately dispatch a superior force, under the joint command of the generals Nicias and Nicostratus, to retake the two objectives on the westernmost peninsula of Chalcidice.
Although the Athenians possessed the numerical advantage in both hoplites and light troops, the Spartan officer Polydamidas (Brasidas was now at Scione) responded to the unfavorable odds by posting his composite force of Spartan mercenaries and local troops not behind the city walls of Mende, but on a hill outside the city.  The Athenians first attempted to force them back with archers attacking the flank, which was unsuccessful as the Athenian archers were driven off by inferior numbers of Spartan and local light troops, with Nicias himself wounded.  Nicostratus then attempted to force the issue with his hoplite phalanx, only to meet stiff opposition in an uphill battle, which caused the Athenians to surrender the field and retire to their landing point nearby.
Despite the initial success of the Spartan leadership, Mende and neighboring Scione soon fell to the overwhelming numbers of the Athenian force, Scione to direct assault and Mende to a prolonged siege.   As a portent of what would become commonplace to those who were caught in between the two warring powers, the Athenians executed the men and sold the families as slaves when the citadel of Mende finally fell in 421.
The stage is set. The battle lines are drawn and you are in command. Can you change history? 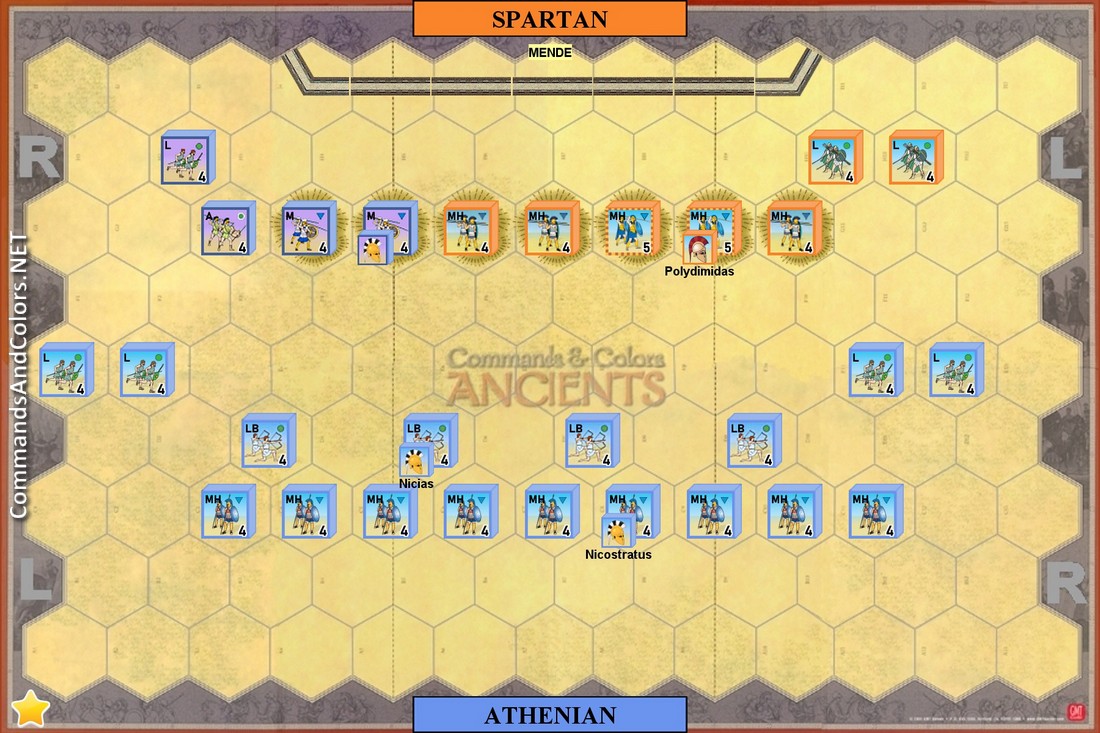 Special Rules
Mendean units may ignore one additional flag when fighting from their own city walls (in addition to the usual rules regarding ramparts).