Historical Background
Potidaea was an allied Athenian city, founded by Corinth, at the base of the westernmost of the Chalcidic "fingers". Athens feared that Potidea may be induced to revolt by Corinth with whom the Athenians were having bad relations. Athens required the Potidaeans to dismantle their landward walls, but they refused and withdrew from their alliance with Athens. Athens had 1,000 hoplites in the area under Archastratus. These were reinforced by a fleet from Athens with 2,000 spearmen under Callias, who became overall commander, 280 archers, 600 Macedonian cavalry, allies from Euboea and light troops from amongst the ship crews. Potidaea, with maybe 800 hoplites, and local psiloi, was reinforced by Aristeus from Corinth with his own special guard of 800 men, 1000 mercenary hoplites and perhaps 400 psiloi.
Callias used his cavalry to prevent the hostile city of Olynthus from aiding Potidaea and then advanced down the isthmus where Aristeus awaited to give battle. Aristeus, with his elite unit, drove off the allied Athenian left wing, but the Athenian right wing under Callias and their centre were equally successful against their Potidaean and mercenary counterparts. Aristeus had advanced in pursiut and found himself isolated from Potidaea by the collapse of his army. He led his men to safety with a dash down the coast under a hail of Athenian arrows. The Potidaeans and their allies lost 300 men against 150 for Athens, Callias being one of the dead. Athens now put Potidaea under siege and it fell to them in the winter of 430/29 BC.
(Based on the book "Land Battles in 5th Century B.C. Greece" by Fred Eugene Ray.)
The stage is set. The battle lines are drawn and you are in command. Can you change history? 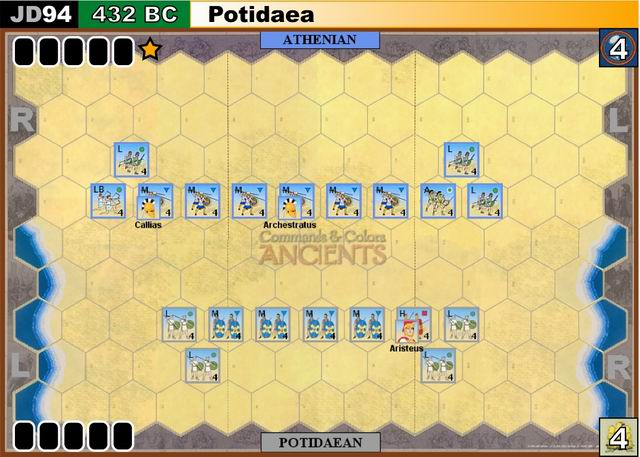