Historical Background
After the peace of Nicias in 421BC during the Peloponnessian war, Athens looked to extend her influence in the Greek world. She saw an opportunity for acquiring the rich resources of Sicily when the Sicilian city of Segesta asked for Athenian help to fight the city of Selunite. In 415 BC Athens despatched an army, under the joint commmand of Nicias, Alcibiades and Lamachus, across the sea to Sicily. The expedition contained 5,100 hoplites, consisting of 2,200 Athenians along with allies and mercenaries, 700 Rhodian slingers, 480 archers (80 Cretans), 120 light troops and only 30 cavalry.
Everything started badly. The Greek cities of southern Italy refused to assist the expedition, the charismatic and enthusistic leader Alcibiades fled to Sparta after being accused of crimes back in Athens and Segesta had only a portion of the money they had promised to pay the Athenians.. After dithering around the island for a while achieving nothing, they finally realised that the key to Sicilian conquest lay in defeating the premier city of Sicily, Syracuse. Syracuse had not been idle and under the urging of Hermocrates they had formed an alliance with various Sicilian cities such as Gela.
The Athenians finally landed south of Syracuse in the Autumn and fortified a beachhead. When the Athenians marched on Syracuse they were met by the Syracusan army and their allies at the Anapus River. The Syracusans had numerical superiority, especially in cavalry. and lined up their citizen militia hoplites 16 deep. The Athenians, 8 deep, took the centre of their line with Argives and Mantineans on their right and other allies and mercenaries on their left. A force of hoplites was held back to protect the camp followers and to form a reserve. The battle was short and intense but the poorly trained Syracusans were no match for their more professional adversaries, and they eventually turned and fled to the protection of the walls of Syracuse. The Athenians did not capitalise on their victory and merely went into winter quarters and then started a siege the following year. This siege would eventually result in the total anihilation of the Athenain expeditionary force in 413 BC.
(Scenario based on the book "SYRACUSE 415-413 BC. Destruction of the Athenian Imperial Fleet" by Nic Fields and illustrated by Peter Dennis.)
The stage is set. The battle lines are drawn and you are in command. Can you change history? 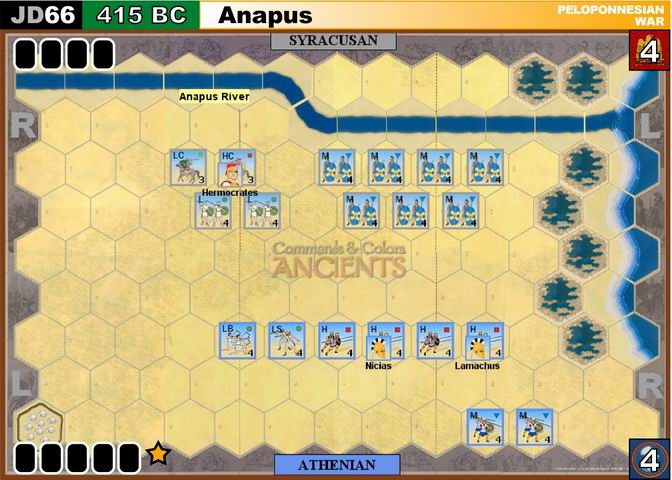 Special Rules
The river (Anapus) is fordable with no combat modifiers.

The camp tile represents the temple of Olympieion.