Historical Background
The PeloponnesianWar (431-404 BC) was fought by Athens and its Empire against the Peloponnesian League, led by Sparta. The first direct battle between Athenians and Spartans took place after six years of "cold war". In the summer of 425 BC, an Athenian fleet sailed to campaign in Sicily. Demosthenes, however, wanted to fortify the small peninsula of Pylos, that could be used as a base in the Peloponnese. The Athenian generals rejected his plan, but a storm drove the fleet to the shore at Pylos. A fort was finished within a few days and the fleet sailed off toward Corcyra, leaving Demosthenes with five ships and their complements of sailors and soldiers to defend it. King Agis, who had marched his army into Attica, returned home alarmed. Spartan forces immediately moved toward Pylos and their fleet at Corcyra sailed there immediately. To meet the imminent attack, Demosthenes divided his forces, placing most of his troops behind the northern fortificatons facing inland, while he with 60 hoplites and a few archers defended the south-western coast of the peninsula, determined to "beat back the enemy at the water's edge". The Spartans prepared to blockade the entrance to the harbor by placing hoplites on the nearby island of Sphacteria, and planned to place ships in the gaps on either side of that island before the Athenian fleet arrived. The landing began where Demosthenes had expected, but only a few triremes were able to approach the beach at a time. The Spartan captains, following the example of Brasidas, drove their ships into the rocky shore to give their men a chance to disembark and drive the defenders back. After the Athenians successfully held them off for a day and a half, however, the Spartans ceased in their attempts to storm Pylos and instead settled in for a siege. But the Athenian °eet arrived from Corcyra and, after a decisive victory, gained control of the harbor, trapping 420 Spartan hoplites on the island of Sphacteria.
The stage is set. The battle lines are drawn and you are in command. The rest is history. 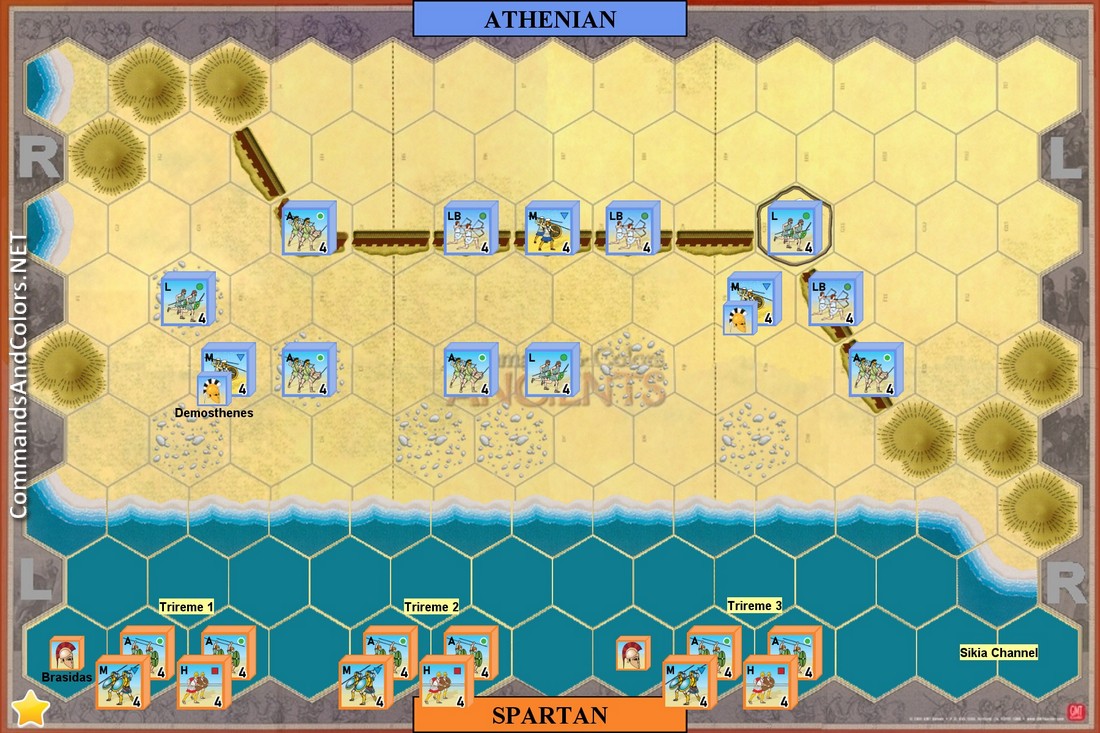 Special Rules
Beach: the seacoast hexes on the ¯rst row play as fordable river, but they cannot be occupied by Athenian units.

Landing: the Spartan player puts 3 Command Cards face down (the "triremes") in front of him and places the corresponding units on top of each CC. Every turn, he can skip his entire turn to land a trireme: add the corresponding CC to his hand and place the 4 units in 4 adjacent seacoast hexes. He has to do it if he has no other units on the board. The triremes should land in the order given (1-2-3) and only if there are 4 adjacent seacoast hexes free. When all 3 triremes have landed, the Spartan player should have 5 CC in his hand.