Historical Background
In 424 BC, under the impetus of Cleon, the Athenians launched a land offensive against Boeotia, allied to Sparta. The campaign plan forsaw an invasion by two armies, one led by Demosthenes in the west, the other by Hippocrates in the east. Demosthenes mistakenly sailed too early and landed at Siphae, where his plans were betrayed and was forced to withdraw. Hippocrates did arrive in Boeotia and began to build a fort at Delium, which was completed in three days. Not aware of what had happened in the west, Hippocrates set up a garrison and sent the rest of his army back to Athens. The Boeotians saw the Athenians leaving, but Pagondas of Thebes, the commander of the Boeotian forces, urged them to attack anyway and “fight to the bitter end”, because he knew the Athenians would eventually return and use Delium as a base for further invasions. Two famous Athenians fought in this battle, the philosopher Socrates as a hoplite and Alcibiades with the cavalry. Marching to a position where a ridge separated the two armies, Pagondas arranged an original deployment. He placed cavalry and light troops on both wings to counteract any flanking movement, and on the right of the hoplite phalanx he massed the Thebans to a depth of 25, a tactic that would be employed with devastating effect by Epaminondas, Philip and Alexander in the following century. The Boeotians charged from the top of the ridge while Hippocrates was still giving the speech to his men, on the right of his line. He quickly noticed that they could outflank the left wing of the Boeotian phalanx, and ordered his flank to charge up the hill. The Athenians on the right quickly routed the Boeotians, and those on the left were giving ground slowly, without breaking, against the deep Theban phalanx. But Pagondas turned the tide of the battle. He sent the cavalry from the right wing around behind the hill, out of sight of the victorious Athenians, who thought a new army had arrived to attack them from the rear. This broke the Athenian charge and turned them into rout. Only the fall of night prevented an even greater slaughter: more than 1,000 Athenian hoplites died, including Hippocrates. The Athenian’s failure to take Boeotia out of the war encouraged the Spartan Alliance to hold out aftervictory had seemed impossible.
The stage is set. The battle lines are drawn and you are in command. The rest is history. 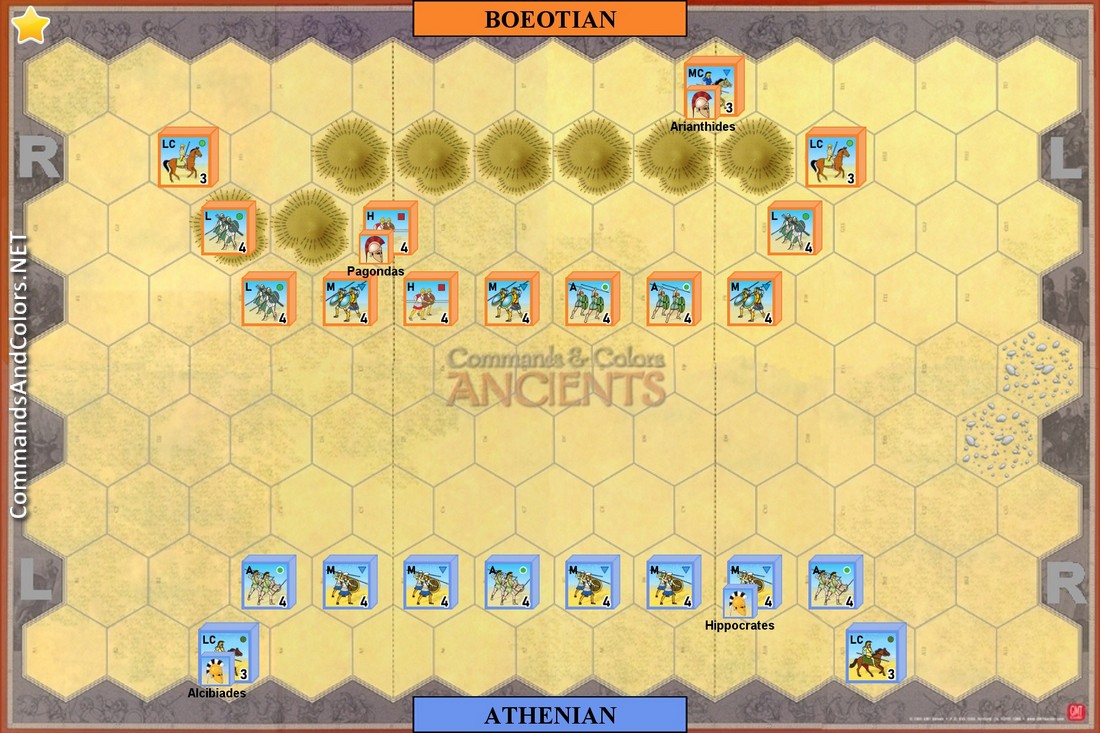