Historical Background
Mantinea was the largest land battle of the Peloponnesian War. In 419 BC, King Agis of Sparta marched against Argos in defense of Epidaurus. But when the Spartan Army was ready to strike a decisive blow on the Argives, he concluded a truce with them. This decision was very unpopular, for that army was “the best army ever assembled in Greece”. It also proved to be wrong: the Athenians managed to convince the Argives to break the truce and march against Tegea, the control of which would trap the Spartans in Laconia. Agis had no choice but to march north with the whole Spartan Army. Both armies met near the Pelagos Wood, between Tegea and Mantinea. The Spartans began to divert a river into the Zanovistas stream in order to flood the Mantinean territory, trying to force a battle. The Argives, however, moved quicker than expected and waited in full battle order for the Spartans as they emerged in column from the forest. But the Spartan discipline and training allowed Agis to place his army in order of battle before they attacked. The Sciritae formed on the left, and the Tegeans, fighting for their homeland, took the postion of honour on the right. The Mantineans held the right of the Argive line, and the Athenians formed on the left with their cavalry. Each army began to edge right, as the hoplite phalanxes moved toward their unshielded side. Agis detached his left to match the length of the Argive line and ordered Hipponoidas to cover the gap. The latter was unable, or unwilling to move from the right on such short notice, and the Mantineans with the elite Argive Thousand routed the isolated left wing. The Spartans, however, sure of their strength passed over to the attack on the center and right and routed the Athenians and Argives in front of them, who “did not even stand to fight, but fled as the Spartans approached”. They then began a pivoting movement which triumphed over the entire Argive Army. The losses due to the rout were not higher thanks to the Athenian cavalry. Sparta could have lost the whole war that day, but instead restored its prestige of near-invincibility in hoplite combat and dissolved the Argive Alliance, leaving Athens isolated on land.
The stage is set. The battle lines are drawn and you are in command. The rest is history. 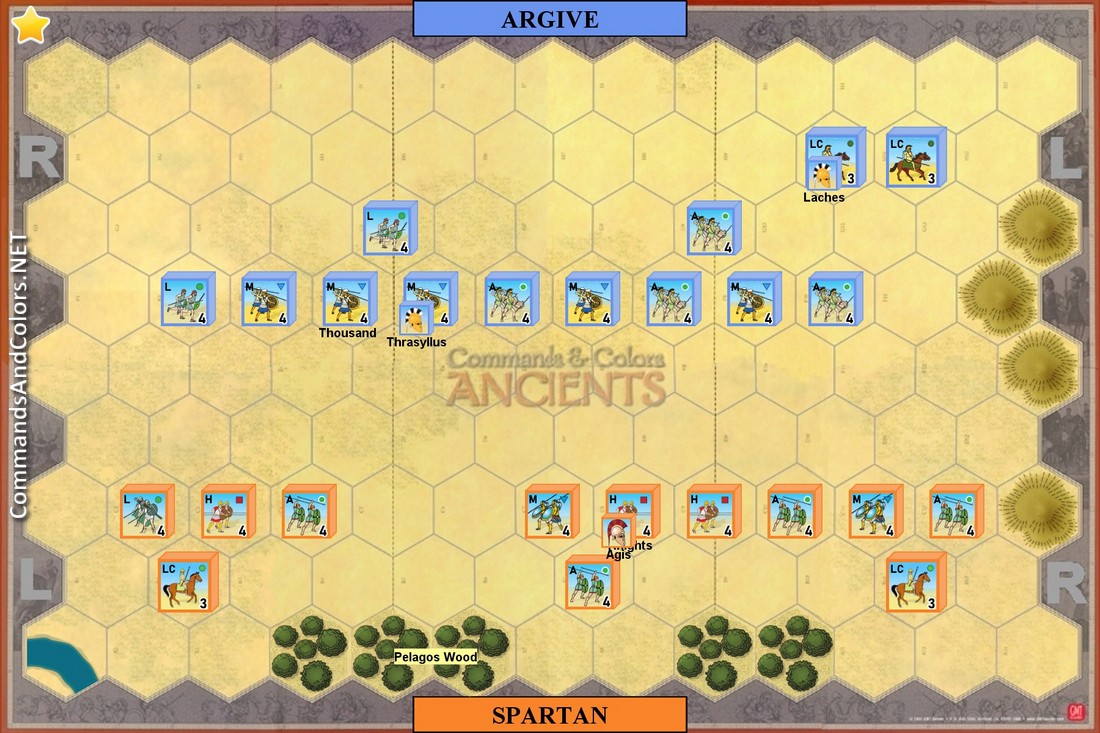 Special Rules
• The stream is fordable.

• The Argive Thousand and Agis’ Knights are special units: they will ignore 1 sword symbol and may ignore 1 flag.