Historical Background
In 415, Athens sent an armada to Sicily, commanded by Nicias (who fell ill), Alcibiades (who was recalled and fled to Sparta), and Lamachus (who was killed in action). The Sicilian Expedition, doomed by this lack off eadership, culminated in the siege of Syracuse. The Athenians needed to rise a siege wall about the city to complete their naval blockade, but the Syracusans, commanded by Gylippus of Sparta, built counterwalls and kept open their lines of communication. Still, the Athenians decided to continue the siege and sent Demosthenes with reinforcements. This was a bold move, because early in 413 the Spartans occupied Decelea near Athens, but the Athenians believed that success at Syracuse would deter other enemies. The Syracusans, who had already come to believe in victory, were shocked by the arrival of Demosthenes, but his first attack on their counterwall on the Epipolae plateau failed. He then planned a daring attack by night, leading about 20,000 hoplites and light troops before the rising of the moon to the pass at Euryalus, where they surprised the Syracusan garrison and took their fort. The Syracusan guard that first came to the rescue was routed, and the Athenians raced ahead to exploit their success, capturing and tearing down parts of the counterwall. Gylippus could not stop the rampaging Athenians that kept racing eastward, but they finally fell into disorder and were routed by a regiment of Boeotians, commanded by the Theban Xenon. This was the turning point of the battle: as soon as some Athenians were turned back toward the west, confusion set in. In the dim light of the moon, the still advancing Athenians could not distingish enemy from ally and “they attacked one another, friends against friends”. Most of them did not know the plateau, and trying to escape in the darkness many jumped off the cliffs, while the Syracusan cavalry hunted down those still wandering about. All hope of victory at Syracuse was abandoned. The Sicilian disaster (almost all men and ships were finally lost) was the beginning of the end for Athens. It surrendered to the Spartans in 404 BC, after “thrice nine years” of Greek Civil War.
The stage is set. The battle lines are drawn and you are in command. The rest is history. 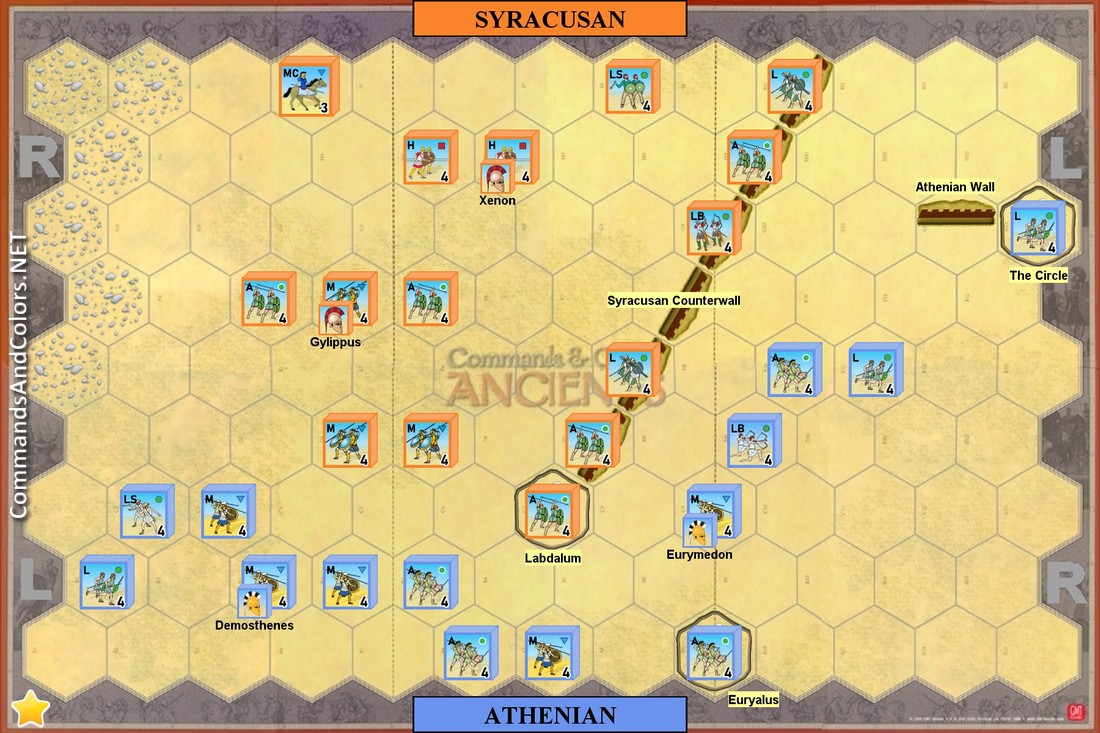 Victory
7 Banners or Tear down the whole Counterwall

Special Rules
Counterwall: if an Athenian unit ends its turn on a Syracusan Counterwall hex, it tears the wall down and removes the tile.