Athens vs Syracuse: The Battle of the Anapus 415BC 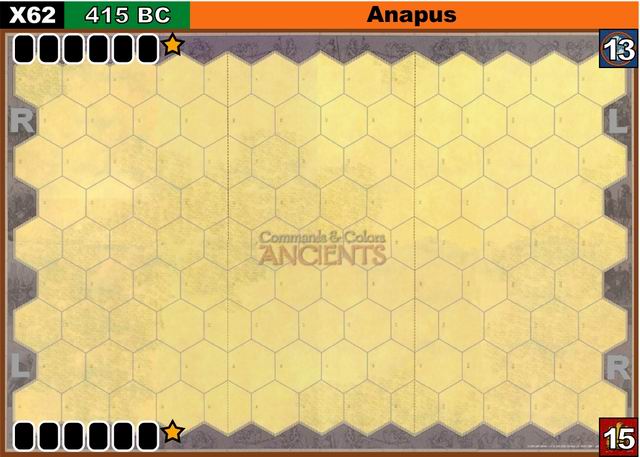 Scenario Special Rules:
Command Rules:
All Leaders may cancel a retreat or a sword hit if present with the unit.
All Leaders, may only support units involved in close-combat or Battle-back if they are directly stacked with the unit. Units on both sides involved in close combat with the support of a Leader may only count one helmet hit amongst those rolled to inflict a hit on an opposing unit.
The Syracusan ‘Allied General’ may not support or benefit a unit involved in close-combat or battle-back unless the unit is an Allied Medium Infantry unit.
Units and the Rally Card:. No unit can be rallied to beyond five blocks or its strength at the start of the game whichever is less. If a Player rolls “swords” when attempting to rally he may freely chose which unit gets a block back.

Hoplites:
Both sides Heavy Infantry & Medium Infantry regardless of type/nationality are assumed to be heavily armed and armored Greek warfare fighting style Hoplites—therefore such units always ignore the first sword hit inflicted upon them, except if the unit is in an outflanked position in which case such hits are applied normally.

Athenian Slingers:
The Athenian Light Slinger unit is made up of elite mercenaries, when firing their missiles at enemy Light (Green) units they hit on swords—in battle back only they also hit on swords.

Athenian Rowers:
Athenian Rowers are treated as Light Infantry for all purposes, however they have no missile capability and cannot voluntarily move or attack into hexes more than 3 hexes away from the initial setup hexes of the Athenian Rampart and Camp hex tiles.

Syracusan Allied Medium Infantry: The four units designated as Syracusan Ally Medium Infantry units are somewhat less reliable in close-combat/battle-back:
These units do not automatically make a hit when they roll: the appropriate color of the unit they are targeting, swords, or Flags in close-combat or battle-back—re-roll any color, sword, or Flag hits inflicted by these units in the initial roll to determine the real result and go with the outcome of the second roll. This rule does not affect hits inflicted via helmet rolls by these units stacked with a leader, or hits inflicted on an evading unit.

The “March to Battle”scenario:
Athenian Initial Maneuvering Rules & Syracusan off-map forces:
Historical Note: Initially the Syracusan army did not expect battle with Athenian forces that day. The Athenians were able to cross the two rivers in front of their camp and quickly deploy for battle.
a) During the first six Athenian card plays/player-turns Athenian units/leaders may not move adjacent to Syracusan units or engage them via missile fire—Athenian Movement and ordering of units is conducted normally otherwise.
b) During the first five Syracusan card plays/player-turns the Syracusan units/leaders may not move or missile fire at all. The Syracusan player-turn is executed as follows during these first five player-turns only—a) Play any one card b) Bring one initially off-map unit or leader onto the board in hexes I12, I10, I8, I6, I4, I1 c) Draw another card

The “Extended Campaign” Scenario:
Note: This scenario assumes the Syracusans weren’t caught flat-footed by the Athenian advance.
a) The Athenians setup as in the “March to Battle” Scenario and the Syracusans setup as in the Anapus River Battle Scenario with all their units initially on the map. Both maps and all units are utilized.
b) There are no initial Movement restrictions and both sides can attack each other from the very start.
c) The Athenians Move First

and the card draw on both sides is the same as in the March to Battle” Scenario.