Historical Background
In 415 BC Athens and Sparta were still nominally under the Peace of Nicias, when the Sicilian city Segesta requested help from Athens in their war against Selinus. Some Athenians saw the oportunity to take over the whole Sicily, Syracuse, and even Carthage. Nicias said in the Assembly that a huge armada would be necessary, hoping that the Athenians would understand that conquering Sicily was impossible, but people became even more enthusiastic and he was elected general, against his wishes, to lead the Sicilian Expedition. His colleagues were Lamachus and Alcibiades, but when the fleet landed at Catana the latter was recalled to Athens for trial and fled to Sparta.
The Athenians used a double agent to lure the entire Syracusan army to Catana, while they landed unopposed on a beach south of the Anapus river. They constructed a palisade to protect the ships, destroyed the bridge over the Anapus, and took up a strong position protected from flank attacks of the Syracusan cavalry by hills on one side and marshes on the other. When the Syracusans returned they challenged them to fight, but the Athenians did not rise to the bait and the Syracusans made camp for the night.
The Athenians attacked at dawn across the river taking the enemy by surprise. Some soldiers had gone home to Syracuse and had to hurry back and find a place in the ranks wherever they could. The Athenians formed at an angle to the river, using it to guard their left, and placed their light troops on the wings to fight off the Syracusan cavalry. Despite the greater depth of the Syracusan phalanx, the superior discipline and experience of the Athenians carried the day. However, they could not undertake an aggressive pursuit and score a decisive victory due to the lack of cavalry. It was a tactical victory without strategic result. The Athenians sailed back to Catana for winter, while the Syracusans prepared for a siege and sent to Corinth and Sparta for help.
The stage is set. The battle lines are drawn and you are in command. Can you change history? 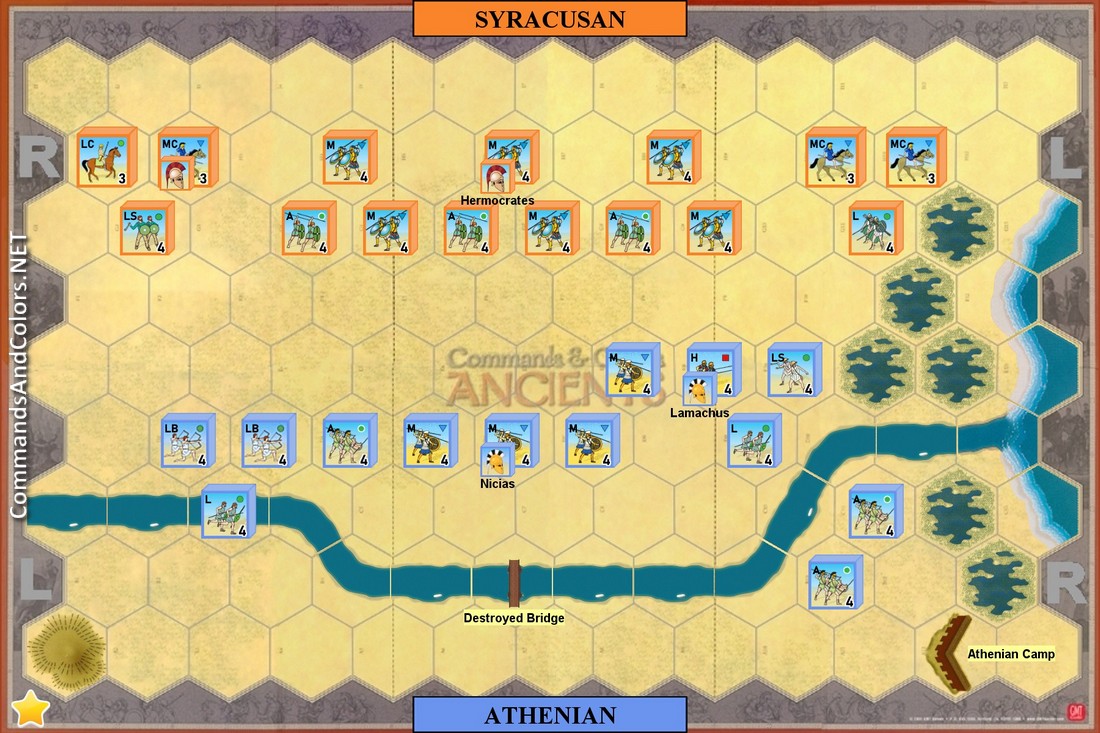 Special Rules
The Anapus river is fordable except at the (destroyed) bridge hex, which is impassable.

The Syracusan player earns 1 Banner for each unit that stays on one of the two Athenian camp hexes.