Historical Background
The hostages of Sphacteria lead the faction favoring peace to power in Sparta. When in 424 BC Brasidas asked the Spartans to lead an army toward Trace to threaten the only accessible part of the Athenian Empire, he only got allies and helots, that would at least not flee to the Pylos sanctuary. He reached Thrace and offered generous terms to the people of Amphipolis, who surrendered without a fight. The Athenians held Thucydides responsible for the fall of the city because he had left his post at the nearby base Eion. He was sent into a twenty-year exile, where he wrote his History of the Peloponnesian War.
In 423 BC Athens and Sparta signed a truce, hoping to exchange Amphipolis for the Spartan hostages. But Brasidas, against the wishes of the Spartan regime, continued to support the rebellion in the area. Athens ended the truce and sent Cleon with an army to recover Amphipolis. He marched toward the city, that was protected on three sides by the river Strymon and on the east side by a high wall. Brasidas did not go out to fight, and Cleon began to move his troops back to Eion.
Brasidas waited till the left wing marched past the South Gate, and with his best men charged the disorganized Athenian center, while Clearidas emerged from the Thracian Gate with the rest of the army. The Athenians on the left wing fled to Eion, while those on the right fought bravely against Clearidas. Cleon was killed during the flight, together with 600 Athenians. Only 7 Spartans died, but Brasidas was mortally wounded. He lived long enough to learn of his victory and was buried in Amphipolis.
The Amphipolitans adopted him as founder of the city.
With the death of “the men on each side most opposed to peace”, Athens accepted to stop the war and signed the Peace of Nicias in 421 BC. Sparta recovered his hostages and Athens the towns captured by Brasidas. Both sides would have time to prepare for the final phase of the war.
The stage is set. The battle lines are drawn and you are in command. Can you change history? 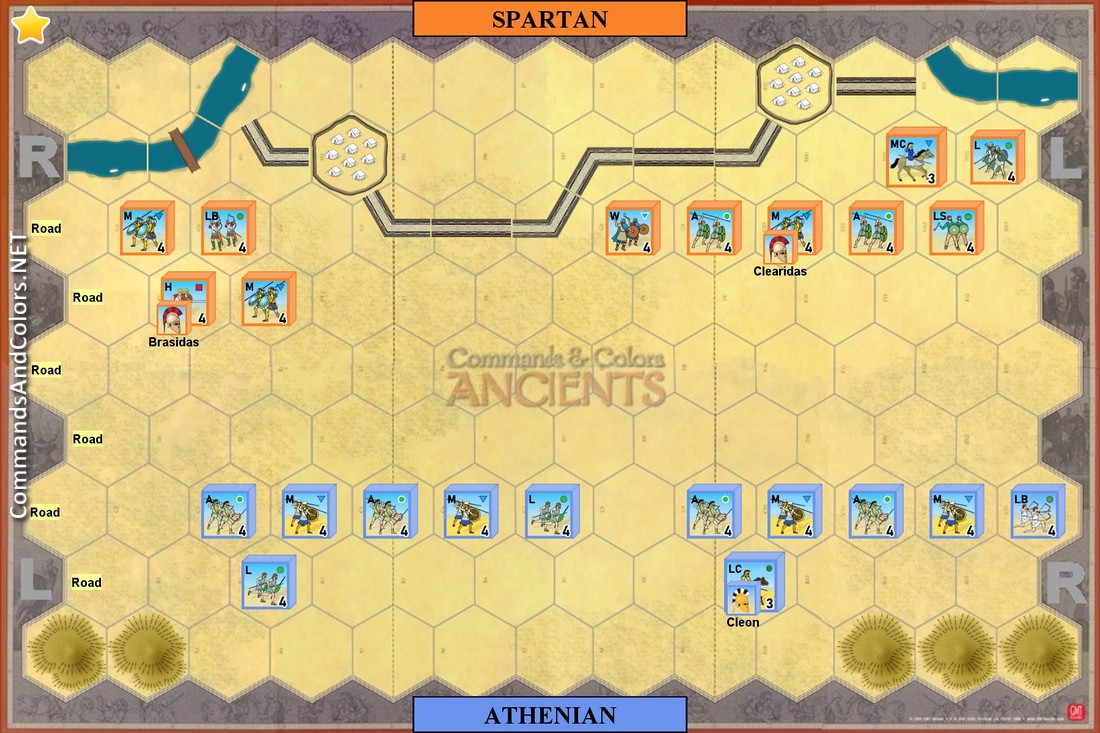 Special Rules
The ramparts of Amphipolis and the river Strymon are impassable. Normal bridge rules are in effect.

Brasidas sortie: once during the battle, the Spartan can play any card in his hand as Double Time.

Flight to Eion: the Athenian will gain 1 Banner for each unit that “flees” (moves) off the left side of the board from an hex between the hills and the river.

The-Admiral replied the topic: #3538 2 years 2 months ago
Yeah, I can see that, but I wonder if that was the designers intent? It feels like they should get a banner, but I'm happy to accept if not.

The-Admiral replied the topic: #3529 2 years 3 months ago
Does the Athenian player receive a victory banner for exiting Cleon off the left map edge?
Read More...