Historical Background
With the Athenian siege walls steadily enclosing Syracuse, the Syracusans appealed for aid from their Corinthian and Spartan allies. The two cities sent a force by sea under the command of the Spartan General Gylippus, who landed at Himera and recruited further troops. He arrived in Syracuse with a force of approximately 3,000 men. The Athenian siege wall was almost complete to the north of the city. Gylippus was determined to prevent its completion and so he ordered the building of a counter wall and then launched an attack on the Athenians. The attack however was made in the constricted space between the two walls. The Syracusan cavalry and light troops were unable to properly deploy, and the superior Athenian hoplites won the day. Gylippus launched his next attack further north at the end of the two walls, where his cavalry and light troops had room to maneurvre. They outflanked the Athenian line which then broke. The Syracusans were now able to complete their counter wall and thus prevent the encirclement of the city.
At the time of the battle, Nicias was suffering from exhaustion and illness, and his general performance was lacklustre. He had made no attempt to intercept the Sparto-Corinthian fleet and had allowed Gylippus's small force to slip overland into Syracuse unmolested. Nicias, now despairing of success, requested that Athens recall his army or send massive reinforcements. The Athenians chose the latter and almost the entire force, including Nicias, would be lost the following year.
The stage is set. The battle lines are drawn and you are in command. Can you change history? 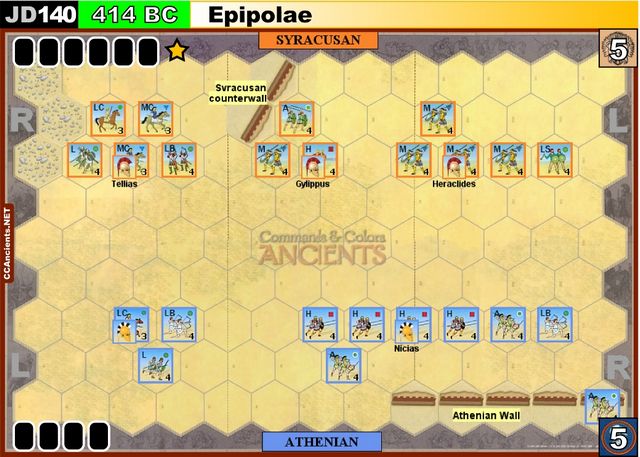 Special Rules
The Broken terrain represents a steep escarpment and is impassable.