Historical Background
In the spring of 479 BC, various Ionian cities began a revolt against their Persian rulers, and soon were forced to turn to the Greek mainland for help. A meeting was called in Athens, and a Greek fleet of 110 ships set sail from Delos under the command of the Spartan King Leotychides. The Persians, no longer confident after the crushing naval defeat at Salamis, dismissed their Phoenician naval contingent and moved the remainder of the fleet to Mycale, where they joined forces with the army that Xerxes had led back to Asia. The Greeks expected a naval battle, but when they approached the Persian camp, they found the ships beached and the Persian army in combat formation. The Athenians, under Xanthippus, landed on the beach and during their advance found a herald’s scepter. Believing it was a divine sign that the Greeks had been victorious at Plataea, they charged forward without the Spartans. The Spartans had landed at another site and were still marching around the flank through the hills. The Persians repelled the Athenian assaults for a time, but eventually the Athenians manage to burst through to the Persian camp. The battle continued with no side certain of victory until the arrival of the Spartans, and the desertion of the Ionian Greeks, who joined in the attack on the Persians. The Persian army turned and fled to the mountains. Mycale ended the Persian Wars and the Greek cities in Asia were accepted into a league with Athens.
The stage is set. The battle lines are drawn and you are in command. Can you change history? 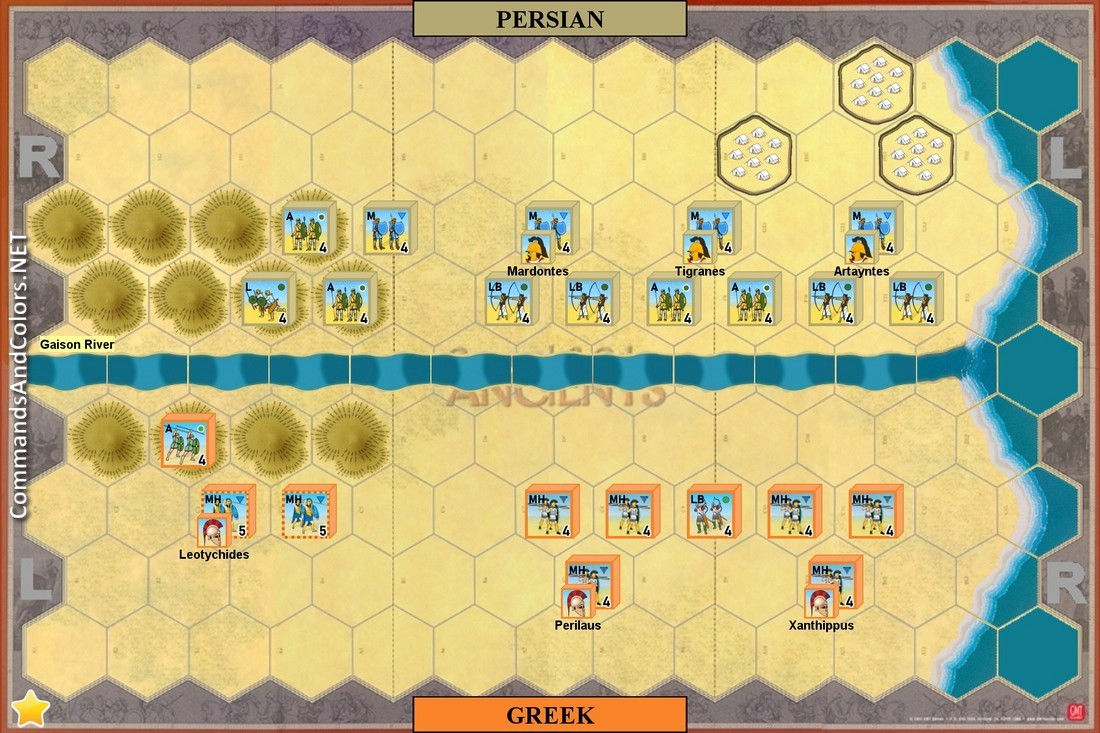 Special Rules
• When a Greek unit occupies a Persian camp hex at the start of his turn, remove the camp hex and gain 1 Victory Banner. In addition, replace all blocks in one Persian Auxilia unit with Greek Auxilia blocks, which represents the Ionian Greeks, who joined in the attack on the Persians. The Greek player, for the rest of the battle, may order this Auxilia unit.

• The Gaison River is fordable.

The Greeks attempted a courageous charge across the Gaison River, concentrating on the right side of the battlefield. The Persians, meanwhile, employed their superior ranged power to shoot and withdraw, drawing the Greeks closer without committing to close combat. The Persian archers were accurate (good dice!) and the Greeks suffered considerable losses before melee ensued. The weakened units were dispatched and only one Persian auxilia unit was dispersed from the field.

The Greeks tried to regain the initiative by pushing in the right as well as on the left, but the Persians withstood the pressure. Perilaus perished in his valiant charge and Tigranes ended the battle by destroying the fourth hoplite unit.

The Greeks started with good Line Command and Order Medium Cards. But the intiative was snuffed out by a demoralizing Darken The Sky on the first Persian round. There were remarkably few casualties, but the Greeks were pushed back - especially on the left side of the Athenian formation. The Greeks regained their composure and pushed on - focusing on the coastside part of the Persian army. The projectiles kept raining on the Greek warriors, however, and a well-timed First Strike from the Persians halted the Greek assault.

The Spartans sought to aid their beleaguered comrades and made some progress. However, the Persian commander cleverly shifted Mardontes and his infantry over to the right, ensuring a relatively even battle for the hills.

In the meantime, Xanthippus and his men pushed their way all the way to the Persian camp, killed a depleted auxilia unit and sought to destroy Artayntes' 1-block unit. The latter, however, were behind the safety of their fortified camp, disregarded the Greek sword roll and dispersed the phalanx on the battle-back. Xanthippus barely escaped the debaccle.

The Greeks now concentrated on their left, seeking to roll up the Persian flank before the Athenian formation was obliterated by firm resistance on the far bank of the river. The Spartans distinguished themselves, crushing both units of Ionian levies before dispatching Mardontes' Persian infantry. One of the Spartan units perished, and the Persians were chasing both Xanthippus and a depleted Athenian phalanx on the far right of the battlefield. Leotychides saw his chance to rout the Persian army and took it. With a lonely Double Time, the Spartan unit and their commander closed in on the fleeing Mardontes and finished him off. This was the final blow for the Persian army.

Thanks to Михаил for two very tense and challenging battles. Especially in the second battle, I felt hard-pressed and felt that I didn't take full advantage of my good cards, with my right-side charge halted in its tracks. The Spartans proved their worth however.

Overall, a very interesting scenario, with the terrain allowing the Persians to fight a very even battle with the hoplite-heavy Greek force.
Read More...