Historical Background
After the triumphant victories at the Meander River (497) and the sacred site of Labraunda earlier that year, the Persian army under the command of Daurises moved to extinguish the Carian uprising once and for all by moving into the highland Carian homelands.  Overconfident and seeking the climactic battle that would remove the Carians from the Ionian Revolt, Daurises stumbled into a well-laid and perfectly executed nighttime ambush at Pedasos.
Following the sage advice of the veteran warrior Heracleidas, the Carians had enticed the Persians to strike with false reports of an army forming near Pedasos.  Outnumbered perhaps as much as 3:1, the Carian forces lay in wait along the hillside road to Pedasos, and caught the Persian army strung out in a line of march and completely unprepared for combat.  The fierce Carians, known prior to the Ionian Revolt as formidable mercenaries throughout the eastern Mediterranean, exacted their revenge for their earlier losses.  The Persian force was crushed and scattered about the unfamiliar terrain, with perhaps only half the imperial army escaping the carnage.  Included in the casualties were Daurises and three of his senior subordinates, bringing the campaign against the interior to an abrupt halt.
Despite the crushing loss, the Persian Empire eventually redoubled their efforts throughout western Anatolia and within a few years had quashed the remainder of the rebellion.
The stage is set. The battle lines are drawn and you are in command. Can you change history? 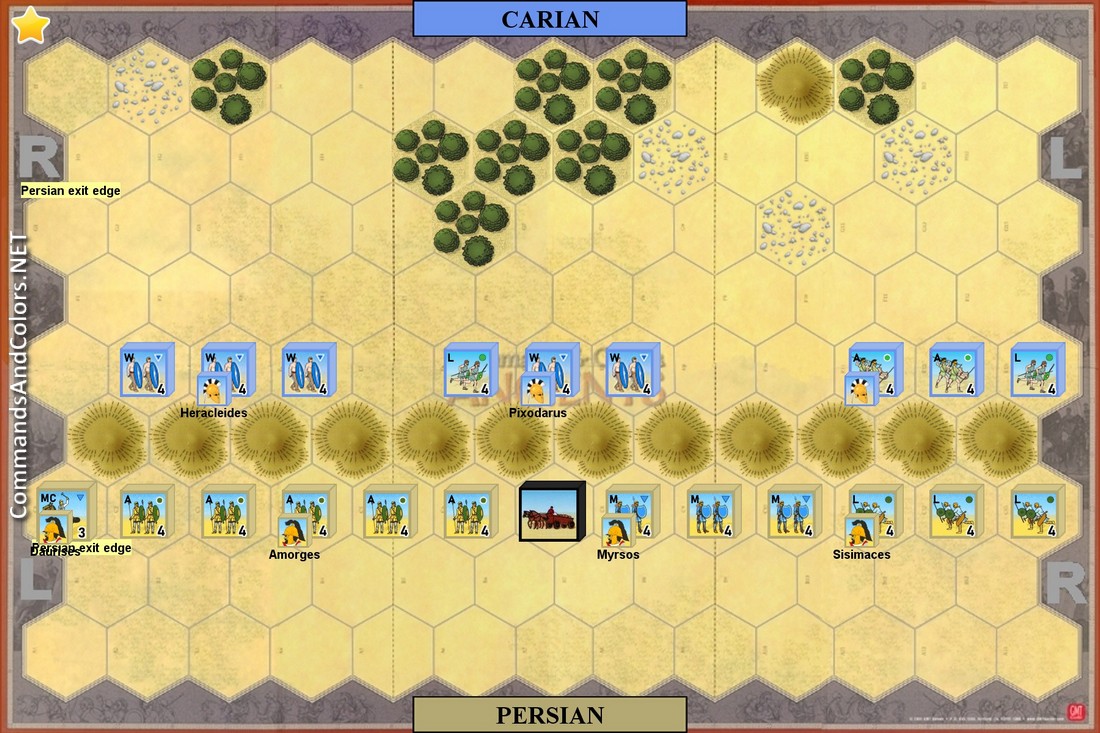 Special Rules
1.   To reflect the confusion caused by the Carian ambush, ALL Persian units (except baggage train and evading units) MUST accept all banners on the first Carian turn.

2.  *The Persian player will gain one extra command card per turn, until reaching four cards.