Historical Background
The Battle of Malene, the last major land action of the Ionian Revolt, was the result of an excursion engineered by the former Milesian tyrant Histiaeus to plunder the Anatolian mainland to feed Ionian refugees who had gathered at Lesbos.
The invaders' ravaging of the countryside came to an abrupt halt when countered by a satrapal Persian army led by Harpagos.  Although probably outnumbering the raiding Greeks, the Persian force had less shield infantry, which emboldened the Histiaeus to engage the Persians with his force consisting of hoplites and light troops composed of crews from his ships.
The battle began well for the Greeks, who utilized their superiority in line shield infantry to close with the Persians, who most likely had cut them off from their ships. The battle turned in favor of the Persians, however, when a Persian cavalry contingent unexpectedly arrived late the battlefield, and proved decisive.  The Persian force routed the invaders, and rounded up prisoners, including Histiaeus, who was executed.  (Interestingly, when the head of Histiaeus arrived as a trophy to Darius I, the Persian leader was upset by the decision to execute the man whose actions had saved his life years earlier in a campaign against the Scythians north of the Danube.)
The Battle of Malene was the last in a series of engagements in the Ionian Revolt that seemed to prove to Darius that the Persian land forces were more than a match for their Greek counterparts.  Unfortunately for the future of the empire, the European Greeks would prove to be a much tougher opponent in the years to come.
The stage is set. The battle lines are drawn and you are in command. Can you change history? 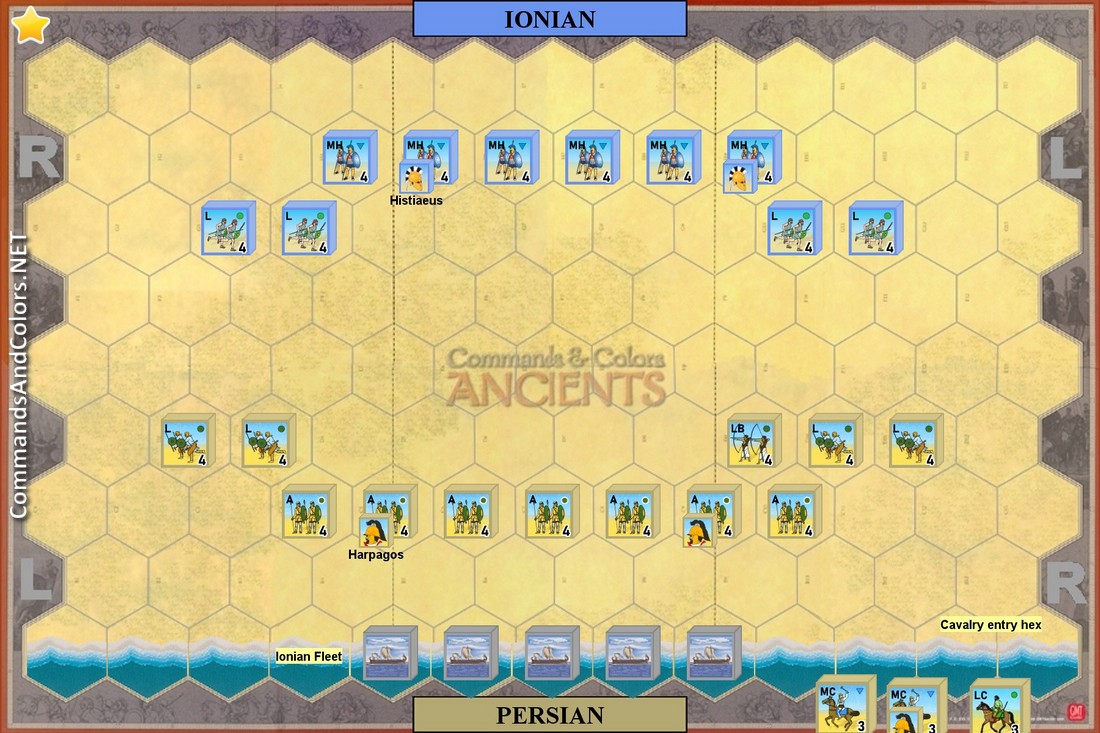 Special Rules
Greek Naval Evacuation
Any Greek unit that reaches a ship counts as a victory banner for the Ionians, and both the unit and vessel are removed from the game.
Histiaeus counts as as a victory banner by himself.
Greek ships may not otherwise move.
The coastal hexes are impassable, unless an Ionian unit is boarding a ship.
Persian units do not interact in any way with Greek ships.