Historical Background
With the Ionian Revolt in full swing on the western coast of Asia Minor, the Greek Cypriots took the opportunity to throw off the rule of their Persian backed tyrants. Onesilos of Salamis expelled his ruling older brother Gorgos from their home city and incited the other Cypriot cities to follow suit. All the cities except Amathus, which was promptly besieged, rebelled. Gorgos fled to the Persians and Darius instructed Artybios to raise an army and navy to retake the island. Meanwhile the Ionian Greeks sent their fleet to back the Cypriot revolt.
The Greek Cypriot army met the Persians on the plain of Salamis, while the Ionian navy engaged the Pheonician manned Persian fleet. The Ionians won a great naval victory, but on land, despite the death of Artybios, the Geeks were defeated due to the defection of the Curian Greeks under Stesenor and the Salamite chariots. Onesilos was killed in the ensuing Greek rout and the Persians proceeded to capture the rebellious Greek cities. The Greek revolt on Cyprus had failed just as the one in Ionia would do
(Based on the historical DBM battle scenario by Luke Ueda-Sarson).
The stage is set. The battle lines are drawn and you are in command. Can you change history? 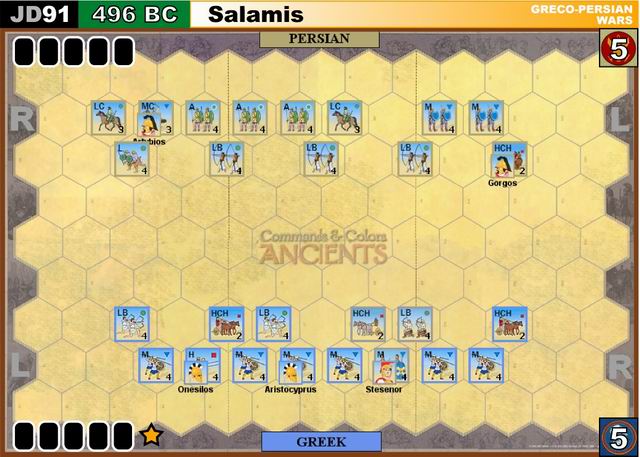