Historical Background
Following their defeat at the battle of Maeander River, the Carians, in their sanctuary of Zeus Stratios, were undedcided as to what to do next. The arrival of a force of Ionian Greeks sent to help their cause raised the Carian spirits and they resolved to fight once more.In the ensuing battle the Persians were again victorious, with the Greeks suffering the worst beating.
Despite these two disastrous defeats, in the following year the Carians were successful in ambushing the Persian army on the road to Pedasus. Many Persians were killed, including their three commanders. This victory ended Persian military actions in Caria for some time.
Pixodaurus was clearly a senior officer in the previous battle due to his input as to battle dispositions. His advice was not heeded and the Carians were then heavily defeated. I have therefore assumed he is now made overall commander for this battle over his disgraced colleagues. I have assumed Heraclides is an influential Greek leader as he was assigned to command the ambush at Pedasus.
The stage is set. The battle lines are drawn and you are in command. Can you change history? 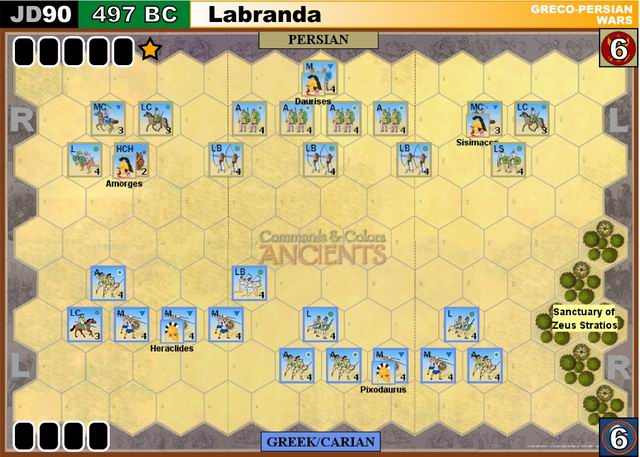 Special Rules
The woods represent the sanctuary of Zeus Stratios and are impassable.