Historical Background
The Carians, of South West Asia Minor, joined the Ionian Revolt to liberate themselves from Persian rule, possibly when they heard of the torching of the Satrapal capital of Sardis by the Greeks. The Persians responded by sending an army under Daurises along with Amorges and Sisimaces into Caria. The Carians assembled their army at the Maeander river at its junction with the Marsyas river. A Carian named Pixodaurus suggested they should cross the Maeander so that their troops would be unable to withdraw and would therefore be forced to stand and fight, but it was decided to let the Persians cross so that they could be driven back into the river.
The Persians duly crossed the Maeander and a bitter struggle ensued. The Carians were eventually overwhelmed by the superior Persian numbers and forced to flee. The Carians suffered 10,000 casualties compared to 2,000 Persians, and retreated to their sacred sanctuary of Zeus Stratios, a great grove of plane trees near Labranda.
The stage is set. The battle lines are drawn and you are in command. Can you change history? 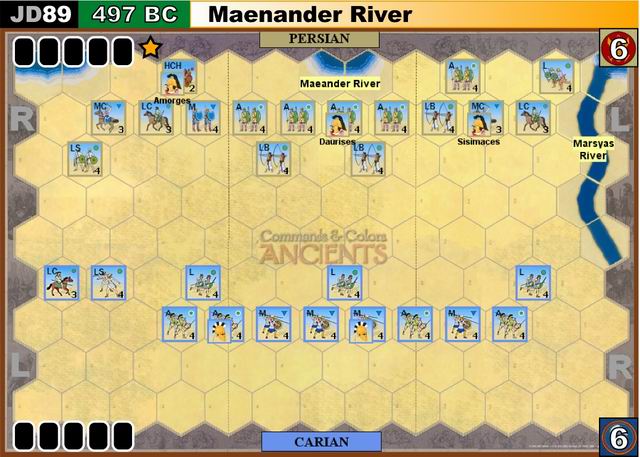 Special Rules
The Sea tiles represnt the Maeander river and are impassible.

The river tiles represent the Marsyas river and are fordable.