Historical Background
In 499BC the tyrant of Miletus, Aristagoras, persuaded the Ionian Greeks to rise in rebellion against their Persian ruler King Darius. Darius placed Miletus under siege while Aristsgorus sailed to Greece to enlist the support of Athens and Sparta. The Spartans refused, but the Athenians sent 20 ships along with 5 ships from the city of Eretria who owed a debt of gratitude to the Milasians for their help in a former conflict. The ships landed at Ephesus and an allied army of Athenians, Eretrians and Ionians marched on the Persian regional capital of Sardes under the command of Charopinos, the brother of Aristagoras, and Hermophantus a man from Miletus.
The Greeks easily captured Sardes and drove the regional Satrap, Artaphernes, into the city citadel. The approach of a large Persian army, probably the one that had been besieging Miletus, forced the Greeks to retreat back to Ephesus, but the Persian supremecy in cavalry meant the Greeks were caught and forced to turn and fight. The outnumbered and mainly infantry Greek army was heavily defeated with the Eretrian general Eualcides being killed. The Athenians retreated to their ships and then back to Athens.
The Ionian revolt would rage for many more years and was eventually crushed in 494BC. Darius never forgot the aid the Ionians received from mainland Greece and he determined that Persia should exact its revenge in the future.
The stage is set. The battle lines are drawn and you are in command. Can you change history? 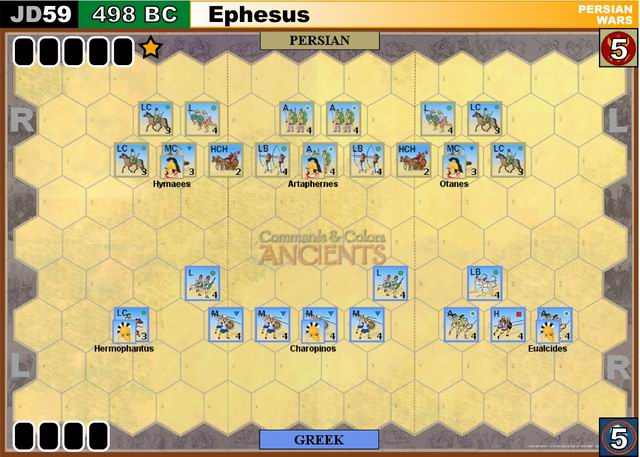 GF1954 replied the topic: #2766 3 years 10 months ago
2 solitaire with the Persians winning both 5- 2, and 5 - 3. In the first game, after the Persians had routed the left flanks of the Greeks, they then turned on the Greek center, and with the Persian center now advancing, the game was quickly over. In the second game, the Greek center was able to advance to the Persian center line, but was unable to withstand the attacks on their flanks. The game ended when a Persian chariot took out a full strength Greek heavy infantry unit with one roll!
Read More...