Historical Background
In the spring of 479 BC various Ionian cities began a revolt against their Persian rulers, and soon they were forced to turn to the Greek mainland for help. A meeting was called in Athens, and ambassadors from several Ionian cities, Athens and Sparta met in the early summer. A Greek fleet of 110 ships set sail from Delos under the command of the Spartan King Leotychides. The Persians, no longer confident after the crushing defeat at Salamis, dismissed their Phoenician naval contingent and moved the remainder of the fleet to Mycale, where they joined forces with the army that Xerxes had led back to Asia. The Greeks expected a naval battle, but when they approached the Persian camp the ships were beached and the Persian army in combat formation. Leotychides sailed his ship close to the beach and shouted an appeal to the Ionians in the Persian camp; the Persians then disarmed the Samians, ordered the Milesians to guard the hill passes in order to keep them away from the camp, and brought together their shields, partly buried in the sand, to serve them as a wall. The Athenians under Xanthippus, the father of Pericles, landed on the beach and advanced. The Spartans, however, landed at another site and had to march through rough terrain. During their advance, the Athenians found a herald's scepter on the beach and thought it was a divine sign: the other Greeks must had been victorious at Plataea (both battles were fought on the same day). Now they were eager to fight and charged forward to the attack before the Spartans arrived. The Persians repelled assault after assault on their shield wall. Eventually the Athenians did manage to burst through the shields and pursued them to their camp. The battle continued with no side certain of victory until the desertion of the Ionian Greeks, who joined in the attack on the Persians. With the arrival of the Spartans, the Persian army turned and fled to the mountains, where the Milesians killed most of them, while the Greeks at the beach burnt their ships. The Persian Wars were over. The Greek cities in Asia were liberated and accepted in a league with Athens against Persia, that soon became an Athenian Empire.
The stage is set. The battle lines are drawn and you are in command. The rest is history. 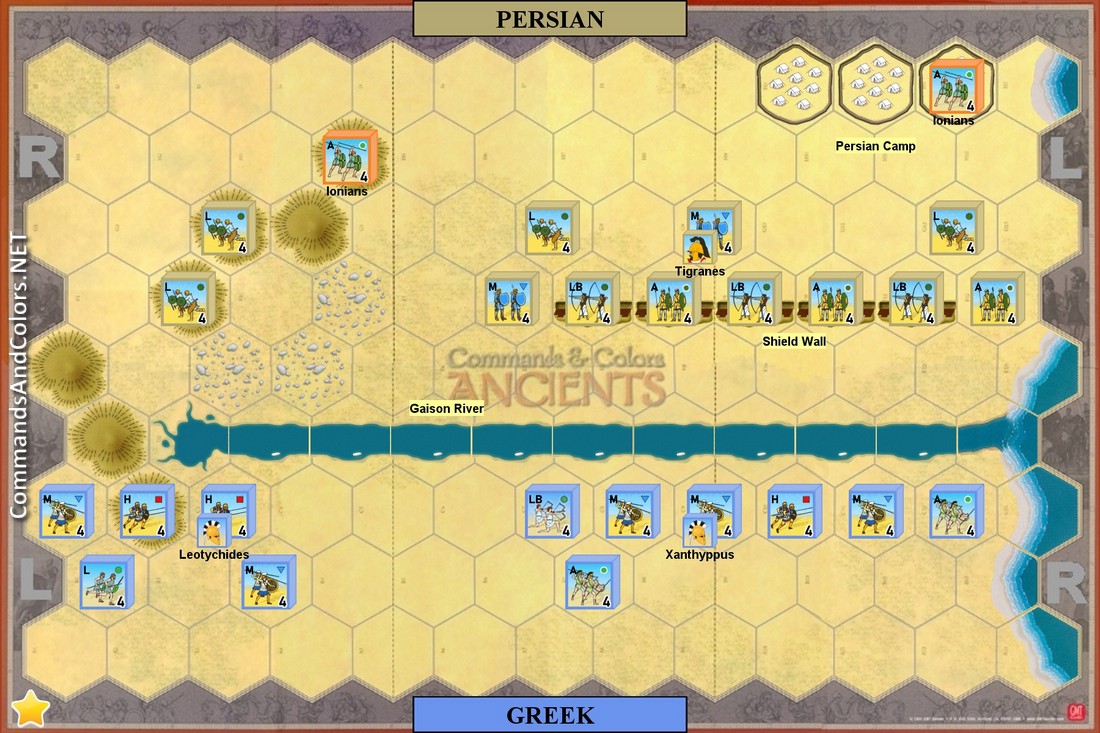 Special Rules
The Gaison River is fordable with no battle dice reduction.

Shield Wall: if a Greek unit enters a rampart hex, it breaks the shields and removes the tile.

Ionian Greeks: place two Special Unit blocks to distinguish them from other Persian units. If a Greek unit enters the camp or any adjacent hex, the Ionians desert: they are replaced by full strength Greek units and are ordered (may move and battle).

GF1954 replied the topic: #3633 1 year 11 months ago
2 solitaire games. The Persians won the first 6 - 1, with the Spartans a non factor. In the 2nd however, the Spartans did save the day for the Greeks, winning 6 - 3. 2 completely different outcomes, all depending if the Spartans make it to the field of battle.
Read More...