Historical Background
King Xerxes, eager to punish the Athenians for his father's defeat at Marathon and their support for Ionian revolts, planned a second invasion of Greece in 480 BC. He amassed a huge army, determined to extend the Persian Empire into Europe. Several Greek city-states gathered around Athens and Sparta, and decided to slow the Persian advance on a narrow pass. After a first unsuccessful expedition to Tempe, the next choke point was Thermopylae. The Oracle at Delphi had announced that Sparta would either be destroyed or lose a King, and Leonidas, one of the two Kings, chose the latter, leading 300 Spartans and other Greeks to one of History's most famous last stands. Xerxes waited four days for the small Greek force to leave. Then, for two days and a half he unleashed his army, wave after wave, against the Greek phalanx that stood firm... until Ephialtes betrayed the Greeks by revealing a goat path that led behind their lines. Dismissing the rest of the army, Leonidas fought with the Spartans and some Thespian and Theban volunteers to their death. Their epitaph reads: "Go tell the Spartans, stranger passing by, that here obedient to their laws we lie". While a tactical victory, the heavy losses and the one week delay inflicted by just a few hundred Greeks was a significant blow to the Persian morale. In September the Greeks defeated the Persians at the naval battle of Salamis and Xerxes, fearful of being trapped in Europe, returned to Asia with part of his army. The following summer a Greek army led by the Spartans crushed the Persian forces in Europe at Plataea; on the same day, a Greek fleet landed at Mycale, in Asia Minor, routed the remainder of the Persian army and destroyed their fleet. The Persians were never to return to Greece.
The stage is set. The battle lines are drawn and you are in command. The rest is history. 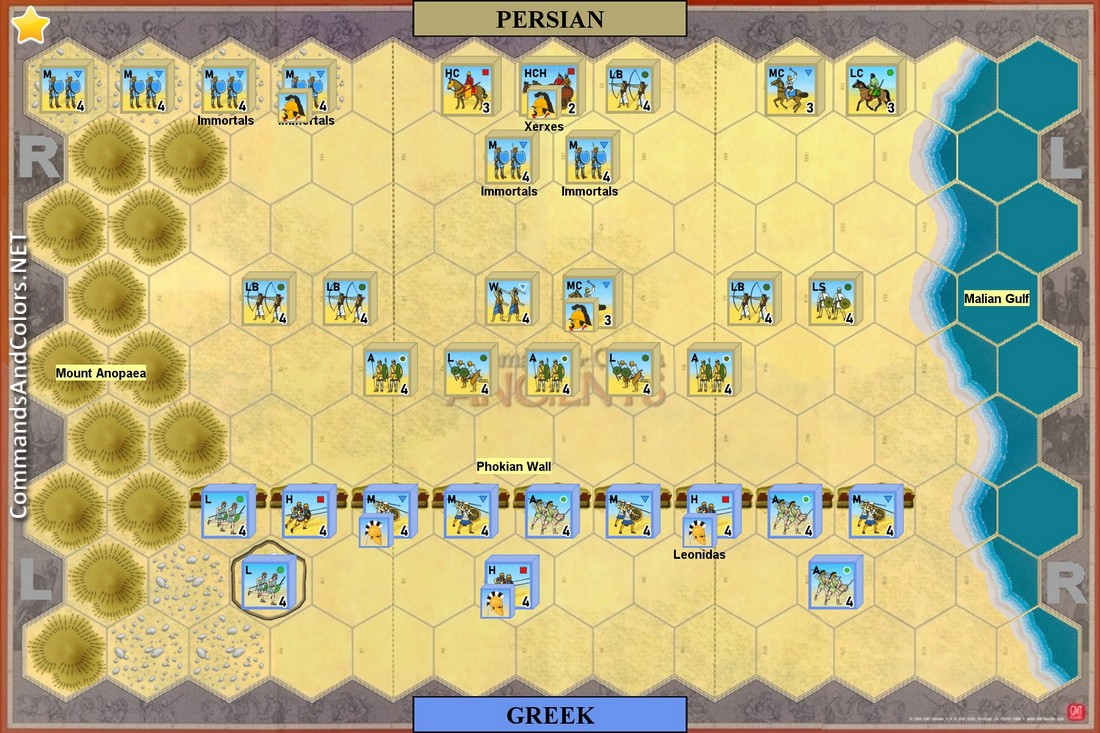 (including Darken the Sky)
Move First

Special Rules
Immortals: they move like Auxilia and are armed with bows.

300 Spartans, 100 Nations: each Greek heavy infantry unit counts as two Banners if eliminated; any Persian unit/leader counts as 1 Banner, but may be immediately re-placed at full strength on an empty hex along the Persian baseline.

Mount Anopaea: all the hill hexes are impassable. However, the Persian player can use Leadership cards to transfer units on the upper broken ground hexes, accross the mountains, to any empty hex of the corresponding section along the Greek baseline. These units are ordered (may move and battle).

Go Tell: the Greek player may, at the beginning of every turn, remove from the board light units that are closer to their baseline than any Persian unit and not adjacent to the enemy. These units are out of the game but do not count as Banners. Leonidas and Xerxes can never evade off the board.

GF1954 replied the topic: #2763 3 years 8 months ago
2 x solitaire The Persians winning 8 - 4, and 8 -5. In both games, the Greeks had to leave the ramparts because they were getting killed by range fire. In the first game, the Persians never got the leadership cards for a rear attack. It wasn't necessary. In the second, they did get one at the end and finished off the Greeks. I think that this scenario is very near impossible for the Greeks to win.
Read More...