Historical Background
After the battle of Salamis the remains of the Persian navy were chased across the Aegean to Mycale in Asia Minor where the Persian Admiral Artayntes, in order to save his fleet, hauled them onto the beach and fortified their landward side. The Greeks led by the Spartan Leotychidas, landed and prepared to attack. The Athenians were nearest the shore followed by various Greek allies and finally the Spartans were the furthest inland, but because of the hilly terrain the Spartans were delayed getting into position. The Athenians on the beech, led by Xanthippus, were coming under arrow fire so they launched their assault without waiting for the Spartans. The Persians had 60,000 troops under the local commander Tigranes. The Greeks numbered 40,000. The Persians feared their Ionian Greeks would desert so they dismissed the Samians to the rear and sent the Milesians to the flank to guard the passes into the interior. The Greek assault was initilly held up but they finally broke through to the fort aided by the Samians arriving behind the Persians. Many Persians, including Tigranes were killed and the Persian navy was set aflame.
The stage is set. The battle lines are drawn and you are in command. The rest is history. 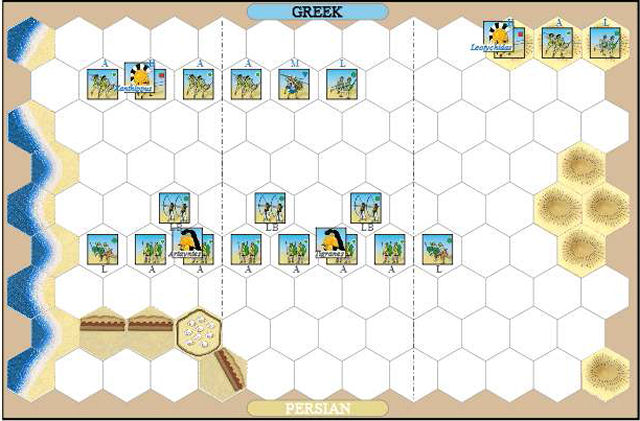 Special Rules
At the start of any Greek turn, following the entry of a rampart or camp tile hex by a Persian or Greek unit, the Greek player may place two light infantry units (Samians) in any A row hex.